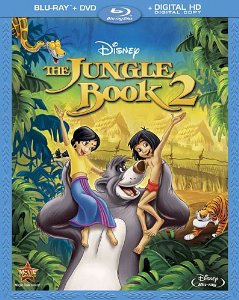 “The Jungle Book 2” was original made for direct-to-video but followed the path of “Return to Never Land” and “The Rescuers Down Under” and headed to theaters. The film is fun, exciting and packs some great music. It is not the best Disney sequel but it follows up well to the classic 1967 film. It combines old friends that we love and some new friends as well. It also packs a great voice cast including John Goodman as Baloo, Haley Joel Osment as Mowgli, Mae Whitman as Shanti. My 21 year old daughter has watched this five times already. A must own for any Disney fan!

Official Premise: Now that Mowgli¹s living in the “man-village”, he cherishes his new best friend and little brother, but he still has that jungle rhythm in his heart. He misses hanging out with happy-go-lucky Baloo the bear and Bagheera the panther. Yearning for freedom, Mowgli runs off into the jungle ­ and encounters his enemy Shere Khan! This time, he¹ll need both his new human family and his old jungle friends to help save the day.

Disney did such a wonderful job with this Blu-ray release delivering a new digital master as this film hits Blu-ray for the first time. The 1080p high definition transfer looks amazing, especially for a Disney direct-to-video cartoon. The colors are vibrant and really pop-out. The DTS-HD Master Audio 5.1 track also works very well with the film’s songs, which are so fun including a few bare necessity as well.

In terms of special features, there is some decent content but nothing outstanding or new to report. There are two deleted songs, each with on-camera intros from EVP, Sharon Morrill and SVP/Music, Matt Walker. “I Got You Beat” and “Braver” songs are played out to storyboards. “Music and More” is a sing-along with the movie & music videos for “Jungle Rhythm” and “W-I-L-D”. Lastly there is “Backstage Disney”, which gives some behind-the-scenes look into the film and it’s legacy.