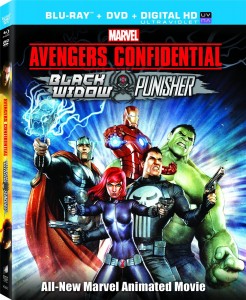 When I saw that Sony and Marvel were teaming up for another animated feature film, I was psyched. I loved what they did with the past short series with Blade, Wolverine and X-Men. The animation style is reminiscence of a Japanese anime and the characters are given a slick make-over. As the title suggests, this film focus on two Marvel popular characters, Black Widow (voiced by Jennifer Carpenter, TV’s “Dexter”) and The Punisher (voiced by Brian Bloom, “Call of Duty: Modern Warfare 3”). Don’t let the cover art fool you either with the image of Iron Man, Thor and Hulk, since they along with a few other Avengers appear for a few minutes in the last few minutes of the film. This is a Black Widow and (some of) Punisher story solely. Parents need to note this is a very HARD PG-13 rating, very violent for sure. Overall, I thought it was worth a watch, but nothing amazing.

Official Premise: After interfering with a top secret mission, THE PUNISHER is taken into custody by S.H.I.E.L.D. AGENT and AVENGER, BLACK WIDOW. At the orders of Director Nick Fury, Punisher and Black Widow are sent on a mission to stop LEVIATHAN, a global terrorist organization that plans to sell stolen S.H.I.E.L.D. technology to the highest bidder. Now, the vigilante and spy must work together to prevent this technology from falling into the wrong hands. The fate of the world, and of the AVENGERS, hangs in the balance.

“Avengers Confidential: Black Widow & Punisher” is packaged as a Blu-ray/DVD combo with an HD Digital Ultraviolet copy included. Sony has always delivered consistently great animated titles. This film is no different it is a solid Blu-ray presentation. The animation style looks very sharp and the colors are very clear. The DTS-HD Master Audio 5.1 track works well with the action scenes especially the final act, which is pretty epic. In terms of special features are two making-of Featurettes & Blu-ray Exclusive Conceptual Art Gallery. The two featurettes are “Espionage and Punishment”, which dives into how these characters were adapted into this anime style. The Vigilante Vs. The Spy” takes a look at these two characters from an origin perspective.