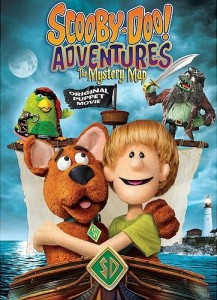 I love “Scooby Doo”, I grew up watching it and now I have a daughter of my own that I can share it with. “Scooby-Doo! Adventures: The Mystery Map” is a unique take on the series since it is done with all puppets. That’s right puppets! I think it works for the most part. I still prefer classic animation but I enjoyed the change. Most importantly, my 20 month old daughter enjoyed this quite a bit. It is short, running 45 minutes, so it also kept her attention the entire time. I would recommend checking this out whether you are an old time “Scooby Doo” fan or if you have kids (for sure).

Official Premise: Get ready to experience the world-famous Scooby-Doo! and Crew like never before in this all-new, original puppet movie! What begins as a routine night for the Gang — which includes the slobbering sleuth and Shaggy eating a triple-extra-large Scooby snack pizza — becomes a mad dash to find the frightening Phantom Parrot, who has a map to pirate Gnarlybeard’s hidden treasure. Scooby sniffs out the map’s clues, which lead him right to a spooky pirate ship. Ruh-roh! What will Gnarlybeard be willing to do to protect his booty? The whole family will love casting off on this mysterious, fun-filled voyage again and again.

There are two bonus cartoons included along with this film. “The Backstage Rage” is the ninth episode of the first season of “Scooby-Doo, Where Are You!”, which first aired back in 1969. The other is “Robopup”, which is the twelfth episode of the first season of “A Pup Named Scooby-Doo” that aired back in 1988. It may be a whole lot of extras but when you have young child that asks for “More” after the film is over, it was nice to have another 45 minutes of episodes to share with her.