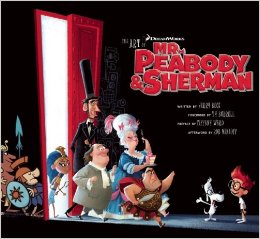 When it comes to DreamWorks Animation, I am usually first in line for their new films. With “Mr. Peabody and Sherman”, I honestly do not see the draw for this film. I am not interested in the film at all. I wanted to get the art of book to see if it would entice me to see the film but it really has not done anything for me. I hope that audiences will be thinking differently since DreamWorks Animation could surly need a hit. The book is packed with concept art, character backgrounds, design inspiration, and other exclusive behind-the-scenes information.

Official Premise: Make way for Mr. Peabody and Sherman, DreamWorks Animation’s new comedy about a dog and his boy. Yes, you heard right — Mr. Peabody’s IQ is so high, this dog is actually the world’s smartest person! So smart that he’s even invented the WABAC, a time-traveling machine that he and his pet boy Sherman use to explore the world throughout the ages. Based on the beloved 1960s cartoon, Mr. Peabody and Sherman is a role-reversal reinvention like no other. Barreling through time, Peabody and Sherman explore the universe, crossing paths with the likes of Marie Antoinette and Leonardo da Vinci. But when Sherman uses the WABAC without permission and history starts to spiral out of control, the results are disastrous—and hilarious.

The author of the book, Jerry Beck has written over 15 books focusing around animation. Tiffany Ward is the daughter of Jay Ward, aka the creator of “The Rocky & Bullwinkle Show” and originator of the “Mr. Peabody and Sherman characters”. She is also the executive producer of the film and gives the book preface. Ty Burrell (“Modern Family”) gives the forward to the book and who voiced Mr. Peabody in the film. The book images were very sharp and crisp. The designs were very impressive but I still wasn’t really drawn to these characters, designs and overall style for this film. I would recommend this to hardcore fans only of the original animation and if you see the film and absolutely love it.