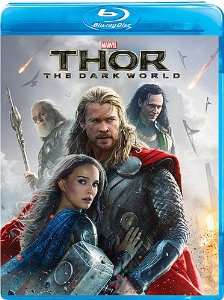 It’s no secret here at Media Mikes that Thor’s is my personal favorite storyline in Marvel’s movie lineup. The first film in 2011 by Kenneth Brannagh managed to brilliantly balance the Asgardian-out-of-water comedic elements with the weightier family politics at play. It boasted a great cast of established talent including Natalie Portman, Rene Russo and Anthony Hopkins while effectively launching two more stars in Chris Hemsworth and Tom Hiddleston. Their on screen fraternal conflict as Thor and Loki respectively was strong enough to jump front and center in 2012’s The Avengers. The Dark World as a follow up to that megahit is slightly less successful in accentuating the appeals of the Mightiest Avenger and often struggles in balancing its tone. Still, with its strong cast of characters intact and imaginative otherworldly battles, the sequel remains a worthy entry into the Marvel Cinematic Universe.

Like the 2011 film, The Dark World begins in a prologue detailing an ancient battle between the Asgardians and the film’s baddies, the Dark Elves. Lead by Malekith (Christopher Eccleston), the Dark Elves lost a powerful evil force known as the Aether to Thor’s grandfather who hid this mysterious red goo out of their reach. Ancient feud established, we move forward to Loki, who actually always manages to speak before Thor in his own trilogy, how’s that for a silver tongue? Last seen muzzled by the Avengers in Central Park, Loki is now on trial before Odin. By his mother’s (Russo as Frigga) mercy, Loki is granted life in the dungeons as punishment for the mess he made in New York. His adoptive brother Thor remains next in line for Odin’s throne. Finally we get to Thor, who has just restored peace to the nine realms yet is distracted by his lingering feelings for astrophysicist-turned-love-interest Jane Foster (Portman). He didn’t even think to call on his last visit to Earth. The nerve. For her part, Foster is still invested in intergallactic goings-ons from her new base in London. Her devices lead her to an unfortunate possession by the Aether, necesitating a field trip to Asgard with Thor to both exorcise her and prevent the Dark Elves from regaining their power. Long story short (too late!) there’s a lot going on in the universe.

With so much going on, you might expect a longer film but The Dark World is shortest in runtime in the MCU and suffers a bit for it. Reviewing the blu-ray I could feel myself suddenly resenting having had to endure the excesses of say, The Desolation of Smaug while being so acutely aware of cut scenes here. The fact is in its rush to get to the action and the big battles, The Dark World misses out on the strengths unique to the Thor franchise. Specifically the family dynamics. Thor and Loki at this point have so much history and when they’re forced to team up against the larger elf threat, it’s no

surprise that the strongest scenes in the film are between the two brothers. Considering we last saw them pummeling the living daylights out of one another in The Avengers, it is a great relief to see both actors really using their on screen chemistry and in the case of Hiddleston, Loki’s scene-stealing sarcasm, rather than they’re weapons. Their grief over a loss in their familly is palpable but then they’re also capable of fighting like children over who gets to drive the spaceship in one riot of a flight sequence. Hemsworth too has great comedic timing that often is overshadowed by his physical presence when it shouldn’t be. The scenes featuring both brothers have emminently more life to them than any between the heroes and this film’s villains.

Likewise, when Jane Foster is able to get her science on instead of being saddled with the Aether, we’re reminded what made her passionate character so likeable the first time. Her continued friendship with Kat Dennings’ outspoken intern Darcy is even more fun this time around with Dennings giving a pretty realistic response to seeing a god teleport through space. At least, I too would be swearing.

A major upside to this galaxy spanning story is how much the scale of Thor’s world increased since his solo outing. Asgard itself is given an entirely new depth and has been equipped with some magnificent viking-inspired flying machines. There’s also the welcome return of Thor’s fighting companions, the Warriors Three and Sif (Jaimie Alexander’s shield maiden who gets the award for most bad ass entrance in the film). The climatic battle which whips all the players around every corner of the universe–cleverly keeping Earthbound Act-of-Marvel-Movie damage to a minimum this time– provides fun glimpses into realms we’ve both seen previously (hey, Jotunheim!) and might explore in the future. As Thor 3 was recently confirmed, here’s hoping next time the creators do take this opportunity to expand their horizons and realize when it comes to the Asgardians more is more.

EXTRAS: Poor Rene Russo–as with the first film, the majority of her lovely performance as mother to the two warring Princes is relegated here to the deleted scenes. There are approximately eight minutes of them which were mainly cut, we’re informed in commentary, to make the film go faster. Unneccessarily I think, but I’m nevertheless grateful they see the light of day here. And with the amount of additional footage that was splashed all over the film’s marketing campaign in the fall of last year that’s still M.I.A on this set, I have no doubt that’s there’s likely still more in the Marvel vault waiting for its turn in the Marvel Phase Two box set.
Seriously, where’s Loki rocking this look from? 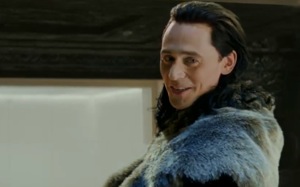 As with all the recent Marvel releases, the disk is in fact packed with bonuses. Beyond the deleted scenes, there’s a fun gag reel, commentary with Kevin Feige, Alan Taylor and Tom Hiddleston sharing easter eggs that I even missed on theatrical viewings. Hiddleston also gets a moment to comment on his time spent in Captain America’s suit for a shapeshifting sequence (“it fit like a glove!”) and if you have need to see him looking like Thor, you can also find that screen test on one of the Blu-ray’s featurettes.

Crucially there’s the most substantial Marvel “one-shot” short film to date with “All Hail the King.” We get to catch us up with Ben Kingsley’s Iron Man 3 character in a funny way but also in a way that has much larger implications to the Iron Man story. Also it has a hilarious cameo from a character I had genuinely not expected to see again.