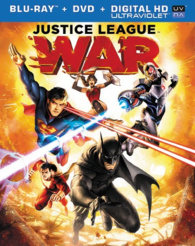 “Justice League: War” is based on the 2012 graphic novel, “Justice League: Origin” and focuses on the world before the Justice League was created and gives us a new animated incarnation of DC Entertainment’s “The New 52”. The DCU movies are getting better and better with each new title. This one is edgy and really uses its PG-13 to the fullest. There is some decent kills, some of which are quite bloody. I just really enjoyed this origin story all around. I will be anxiously waiting for Spring’s “Son of Batman” up next.

The film packs a solid voice cast including Jason O’Mara as Bruce Wayne/Batman, Christopher Gorham as Barry Allen/The Flash, Justin Kirk as Hal Jordan/Green Lantern, Alan Tudyk as Clark Kent/Superman, Michelle Monaghan as Diana Prince/Wonder Woman, Shemar Moore as Victor Stone/Cyborg, Sean Astin as Shazam, Bruce Thomas as Desaad and Steve Blum as Darkseid. I did not think that Alan Tudyk at first would make a great Superman…but he definitely nailed it.

Official Premise: When the powerful Darkseid and his massive, relentless forces invade Earth, a group of previously unaligned super heroes — misunderstood and, in some cases, hunted by the authorities — discover the only way to fend off the attack will be to work together as a cohesive unit. Batman, Superman, Wonder Woman, Green Lantern, Flash, Shazam and Cyborg combine their respective talents in an all-out battle to save the planet.

Warner Bros. yet again delivers a very impressive combo pack including Blu-ray + DVD + Digital HD UltraViolet copy. The animation in the film is really sharp. I loved the character designs showing our superheros quite younger. The action is also represented well within the Blu-ray transfer. The DTS-HD Master Audio 5.1 is also rock solid and packs a real punch. The walls were definitely shaking in some of the epic battle scenes.

The special features are impressive like the film. There is “Deconstructing Justice League: War with Jay Oliva & Jim Lee”, which servers as a part commentary/part documentary going deep into the film. “Creating Heroes: The Life and Art of Jim Lee” is a documentary looking into the work of the great comic artist. “Justice League: War Act D” looks at the film from animatic to pencil tests. There are four episodes taken from the DC Comics Vault including Justice League Unlimited Season 3 “Destroyer”, Batman: The Brave and The Bold Season 2 “The Malicious Mr. Mind”, Young Justice Invasion: Destiny Calling Season 2 Part 1 “Happy New Year” and Season 2 Part 1 “Earthlings”. Lastly there is a sneak peek at “Son of Batman”, the next DC Animated Feature.