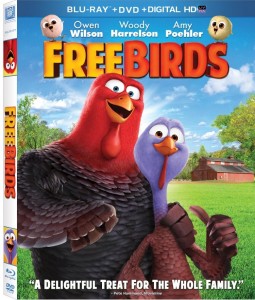 “Free Birds” is not a bad movie, it is just not a great movie. The story is kinda blah and rather bland. The animation is solid and there are some good jokes but just nothing special. What the film does have is a solid voice cast including Owen Wilson, Woody Harrelson and Amy Poehler. In fact, this film was released in theaters in 3D and that was actually the best aspect of the film…yet there is no 3D Blu-ray. Kids might enjoy. Parents will hate.

Official Premise: From the Academy Award-Winning producer of Shrek comes a hilarious animated adventure about two turkeys from opposite sides of the tracks who travel back in time in order to keep their species off the Thanksgiving menu. Featuring an all-star voice cast, including Owen Wilson, Woody Harrelson and Amy Poehler, Free Birds is loaded with laughs and stuffed with fun for the whole family!

The 1080p transfer is sharp and like I said the animation is quite vibrant and crisp. The DTS-HD Master Audio 5.1 track works well the film’s antics. The special features are decent. There consist of a few featurettes: Birds Flipping History, Animating Free Birds: The Main Course, Winging It: Animators in Action, Talking Turkey with Composer Dominic Lewis, Shake a Tail Feather and a theatrical trailer. The extras aren’t very kid friendly but do have some good behind-the-scenes content.