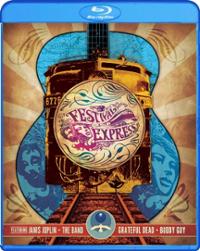 In the summer of 1970, some of the era’s biggest rock stars took to the rails for “Festival Express” a multi-artist, multi-city concert tour that captured the spirit and imagination of a generation. What made it unique was that it was portable; for five days, the bands and performers lived, slept, rehearsed and let loose aboard a customized train that traveled from Toronto, to Winnipeg, to Calgary, with each stop culminating in a mega-concert. The entire experience was filmed both off-stage and on, but the extensive footage and sound tapes of the events remained locked away for decades, only recently having been rediscovered and restored. The film Festival Express is a momentous achievement in rock film archaeology which combines the long-lost material with contemporary interviews that add important context to the event nearly 35 years after originally being filmed.

Directed by Bob Smeaton “Festival Express” is an all inclusive look at this unique tour that in today’s musical climate probably would not be possible. Everyone from the Grateful Dead to The Band and Janis Joplin are showcased on this half concert half documentary film. Probably my favorite part of the whole film was in the early minutes when concert going protesters were complaining over the $14 ticket price. This made me laugh as a bill of this character in today’s world would certainly be pushing triple digital numbers. Though the film was shot in 1970 and subsequently shelved for 40+ years the Blu-Ray version of this release is visually stunning and though the images are clean and crisp there is still that element of graininess that puts a date stamp on the piece. Along with the films stunning visuals is a great audio mix which only further showcased the group’s performances. If you’re short on time definitely jump ahead to The Bands performance of their hit song “The Weight” as Drummer/Vocalist Levon Helms vocals are always a treat to listen to.

If the 90 minute feature film wasn’t enough the special features portion of the disc picks up where the film ends. Bonus performances from Buddy Guy, Eric Andersen and others along with a full length documentary related to the feature titled “Derailed: The making of Festival Express” is a great addition to this portion of the release. Fans of 70’s music and the spawning of the festival concert scene will definitely enjoy this film.