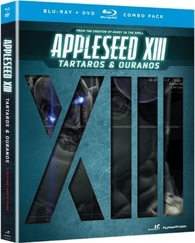 If you are a fan of the series “Appleseed XIII”, then you might want to consider checking out “Appleseed XIII: Tartaros & Ouranos”…as long as you do not expect new content. This new release from Funimation is two-film shortened summarization of the 13-episode anime series. I have to admit, I was a little bit hesitant since I did like the “Appleseed XIII” quite a bit, but these two films do work very well. They are tighter and really pack a nice punch. What is nice about these, most importantly, is that I feel that you can own both of these, the movies and the series, since they are both different beasts. A no brainer purchase if you love great anime.

Official Premise: In the wake of destruction from a worldwide non-nuclear war, the city of Olympus has become the control center of the world. As humanity adopts biological enhancements in attempts to achieve perfection, a terrorist organization uprises to prevent what could be the eventual extinction of the human race. Two former LAPD SWAT members join a special mech-piloting, military force to take down the leader of the terrorist organization.

Funimation Entertainment are the best when it comes to their Blu-ray anime releases. They really give a lot of love to these and I respect that. This release comes stocked with a Blu-ray + DVD combo pack. The 1080p transfer is awesome and really works well with this sharp and snazzy CG animation. There are two DTS-HD Master Audio 5.1 tracks included for both English and original Japanese audio. In terms of special features, there is nothing too impressive here. There are original previews for both “Tartaros & Ouranos”. There is a textless closing song and trailers included.