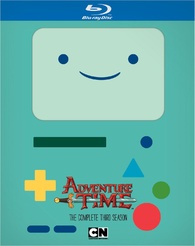 “Adventure Time” is no question of the most bizarre, unique and best shows on television right now. There are some episodes where I am left on the floor laughing and then some where I am totally freaked out and that is why I love this show so much. The third season was when this show started really getting some steam behind it and fans were spreading the word like wildfire and making it the mega hit it is today, myself included. This was my first season that I watched and fell in love. A must own for any fan of the show!

Official Premise: It’s one crazy adventure after another in Cartoon Network’s #1 hit comedy show and Emmy-nominated series. Follow the post-apocalyptic adventures of Finn (voiced by Jeremy Shada), a human boy with a funny hat, and his friend Jake (John DiMaggio), a magic and mischievous dog. They’re out to have the most fun possible and they sure do find it exploring the Land of Ooo!

Here are the episodes included from this season: “Conquest of Cuteness”, “Morituri Te Salutamus”, “Memory of a Memory”, “Hitman”, “Too Young”, “The Monster”, “Still”, “Wizard Battle”, “Fionna and Cake”, “What Was Missing”, “Apple Thief”, “The Creeps”, “From Bad to Worse”, “Beautopia”, “No One Can Hear You”, “Jake vs. Me-Mow”, “Thank You”, “The New Frontier”, “Holly Jolly Secrets (Part 1)”, “Holly Jolly Secrets (Part 2)”, “Marceline’s Closet”, “Paper Pete”, “Another Way”, “Ghost Princess”, “Dad’s Dungeon” and the introduction of Flame Princess in the finale, “Incendium”.

Cartoon Network delivered this Blu-ray release with beautiful 1080p transfer for each episode. The animation on the show isn’t Pixar quality but I simply love it. The colors are amazing and really shine on this release. I am not pleased with the plain Dolby Digital 2.0 (DVD quality) audio track. This has been the trend for the first two seasons as well, but I was hoping they would upgrade to HD tracks, as the show got more popular. They did include the entire season available to add to your Ultraviolet digital account, which is a super cool.

The special features are a must watch for any fan of the show. There are episode commentaries on ALL 26 episodes this season. This really makes watching the season over and over a must. There is a great interview with series creator Pendleton Ward in “How An Ida Becomes Adventure Time”. There is also an Alternate show introduction, which is cool. Most importantly this season come in a rad BMO case and as an added special treat this BMO slipcase can transforms into a collectible BMO figurine.

Cartoon Network has been great with releasing these seasons on Blu-ray. Season four is next, so hopefully they will be dating that season very shortly. Then that will bring up to the date with the current season five, which actually has been airing since 2012 and will contain 52 episodes or double the rest of the seasons. So I have feeling that Cartoon Network will be releasing season five in two volumes. Either way, bring it on because I want more! I suggest they do a fan contest to pick the box cover for the future Blu-ray case.