So, here we are in 2014. Hopefully, we’ll see more of the awesomeness that we saw in 2013 in comic books, as some seriously cool stuff came out. However, there is always the other side to things; some companies made some horrible errors and some obvious ‘money grabs’. Let’s take a gander, shall we?

Oh DC…it was going so right, where did it go wrong?? Last year saw the reboot of DC with the New 52, which was pretty damn awesome. As with most reboots, all the industry’s best writers and artists were invited to the party, including Jim Lee re-envisioning the Justice League, which was hands down one of the most fun books to read at the time (and I never really liked the Justice League). All of the Bat-Books that came out were so good that I actually didn’t mind having to read multiple books about the same character (something that started in the 80s & exploded in the 90s and has been a major annoyance for me ever since…at one time I remember there being something like 7 or 8 Spider-Man books and the same number of X-Books all coming out at the same time…ugh, there’s only so much story people). I was even getting excited about Action Comics and Supergirl for a few issues, and I absolutely hate the Superman family of books!!

But alas, it all came crashing down. First, they did the unthinkable. They turned 3 or 4 of their most hidden 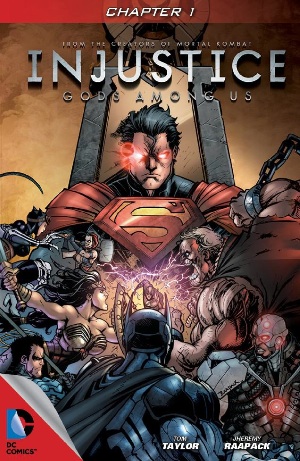 gems, the Coup-de-Villes at the bottom of the Cracker Jacks box, over to Rob Liefeld. WHAT??? ARE YOU KIDDING ME?? DON’T YOU REMEMBER WHO THIS GUY IS?? So, what were once gritty and hard-hitting titles, like “Deathstroke,” “Hawk & Dove,” “Hawkman” and Grifter… all fun reads with outstanding art, became Liefeld strokefests and turned to utter crap, just like everything he’s ever done!! History repeats itself…duh! Then they pulled some of their better writers and artists off of the minor books, such as “Voodoo,” “Stormwatch” and “Captain Atom,” all higher-brow reading with compelling stories that actually made you think about life and existence and such, because they were minor books (even though they were becoming majorly awesome because of those creators) to play shuffle around with the bigger books. Cliché alert…if it ain’t broke…!!!

And then came the villain month money grab…I’m sorry, I mean crossover…which was the downfall of the New 52. Half of the books were just horrible re-hashings of origins, some of the villains were in books that they weren’t even the villains of (such as Ventriloquist in “Dark Knight,” even though they had just revamped the character and introduced her in “Batgirl”). What could have been amazing fun (all the heroes are gone, let the villains play), became the biggest let down in comics of the time. Even the best villain ever, The Joker, was just craptastic. Instead of letting him run rampant, which would have been amazing, they retold an old campy story about his pet gorilla, even though they had just finished one of the darkest Joker storylines ever, including a Joker who was running around with his “face” as a flesh mask that barely hung from his head!! And I won’t even mention the hologram covers and all the supposed shortages that happened…

Then the Zero Year debacle happened, forcing all of the Bat-books to tell the story that the editor wanted told. By this point, there were so many crossovers happening that creators were walking away from the books that they were making incredible because they were being restrained by editorial whims. Once again…REALLY DC?? REALLY?? HIRE BOB HARRAS,THE GUY WHO SINGLE HANDEDLY WRECKED THE X-UNIVERSE IN THE 90S??? Again, DC…don’t you remember these people and what they did. Why hire them when you were doing just fine?!?!

It wasn’t all bad though!! Thankfully, we did see some incredible stuff come out of DC. Scott Snider’s “Batman” stories continue to enthrall readers. “Batgirl” was truly wonderful as she became a renegade running from her own father, Commissioner Gordon. “Batwoman” was awe-inspiring with beautiful illustrations by JH Williams III and killer stories about supernatural villains and dark family secrets. “Swamp Thing,” “Aquaman” and “Earth 2” continue to be the most consistent and well-written stories with killer art and brilliant subtle humor.

To come full circle, DC did produce perhaps the best comic story I’ve read in years, “Injustice: Gods Among Us.” Just simply & truly amazing. Superman goes from a helpless lovesick fool who has no idea how to deal with the Joker (who tricks him into then killing Lois Lane) to a killer and militant totalitarian leader of the world, and Wonder Woman couldn’t be happier. In herown words, “I was waiting for this.” Of course, Batman is leading the resistance. With twists and turns that rock the entire DC universe, including a Harley Quinn who acquires powers, this book is just simply brilliant!!

Next time, the ‘Independents’ and how they are currently ruling the comic industry.

Bear Wolf owns and operates the New Game in Town stores in Kekalb and Dixon, Illinois