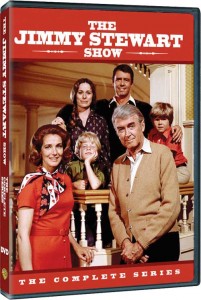 James Stewart was such an amazing actor both dramatic and comedic. “The Jimmy Stewart Show” started in 1971 and ran for 24 episodes. The show included guest stars such as M. Emmet Walsh, Cesar Romero, Kate Jackson, Alan Oppenheimer, Fran Ryan, Jack Soo, Will Geer, Nita Talbot, Regis Philbin, William Windom and Gloria DeHaven. It was a real blast from the bast to watch this show. It still has the comedic edge and delivered a few great laughs. If you are a fan of Mr. Stewart, this would come recommended.

Official Premise: James Stewart made a rare sojourn into the world of Situation Comedy on NBC at the dawn of the Seventies. His gift for comedy, on grand cinema display since the dawn of his career, made him a congenial fit for the familial world of episodic comedy. Stewart plays Professor James Howard, an anthropologist struggling to make sense of the generation gap with his college students and just plain struggling to make sense of his own family.

Jim and wife Martha are busy raising an eight-year-old, as is their twenty-nine-year-old first born, Peter (James Daly) and his wife, Wendy (Ellen Geer). And “Uncle Teddy” (Dennis Larson) is sure to demand “the proper respect” from his five-day-older nephew, Jake (Kirby Furlong). It’s a good thing Jim has a Nobel Prize-winning best friend, chemistry professor Dr. Luther Quince (John McGiver) to help make sense of the chaos, especially after a house fire forces Peter’s family to move in with Jim’s!

This series is brought back to life thanks to Warner Archive, who delivered it onto DVD for the first time. The release is MOD or Made-To-Order, so if you do want to get a copy of this show I would recommend doing so quickly because we do not know for how long they will be producing it. The show looks aged a bit and I do not think there was a full restore here but it looks still decent for DVD.  The show is presented in with its original aspect ratio of  1.37:1. There are no additional special features included.