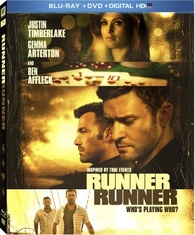 “Runner Runner” seemed to have a lot going for it. A list cast including Justin Timberlake and Ben Affleck, who both are very hot right now. When I first saw a trailer for list I was just extremely disinterested. I think they had the right idea but it was just poorly executed. The script is quite poor and probably should take most of the blame here because our actors do their best to save this film with their performances. Since I am sucker for poker films, I could probably recommend this to fans of Timberlake and Affleck but just keep expectations very low.

Official Premise: Justin Timberlake and Ben Affleck star in this high-stakes crime thriller where the lure of easy money is the riskiest bet of all. When Princeton grad student Richie Furst (Timberlake) believes he’s been swindled by an online poker site, he heads to Costa Rica to confront gambling tycoon Ivan Block (Affleck), the man he thinks is responsible. But Richie will soon face the ultimate power play as he finds himself caught between Block’s promises of unlimited wealth and the zealous FBI agent (Anthony Mackie) trying to bring him down.

“Runner Runner” does get a solid Blu-ray, thanks to 20th Century Fox Home Entertainment. The 1080p high-definition transfer is quite beautiful and really shows off Costa Rica quite well. The DTS-HD Master Audio 5.1 works as well especially with Christophe Meck’s score. The special features are another let down though. “House of Cards- The Inside Story of Online Poker” take a look into the world the film is based around. Besides that there are about 10 minutes of deleted scenes and a Theatrical Trailer included.