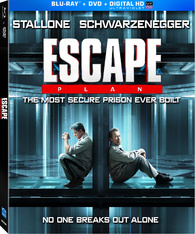 “Escape Plan” is an action fans dream come true bringing legends Sylvester Stallone and Arnold Schwarzenegger together in one film. I know they were in “The Expendables” films together but that felt more like a cameo. “Escape Plan” is pure escapism. It is quite intense and definitely action-packed thriller. It also features an impressive supporting cast including Jim Caviezel (TV’s “Person of Interest”), Curtis “50 Cent” Jackson (“Fire with Fire”), Sam Neill (“Jurassic Park”), Vinnie Jones (“X-Men: The Last Stand”) and Vincent D’Onofrio (TV’s “Law and Order: Criminal Intent”). Recommended for sure to all 80’s action fan boys. These action stars are in their 60’s but they still kick-ass.

Official Premise: One of the world’s foremost authorities on structural security agrees to take on one last job: breaking out of an ultra-secret, high-tech facility called “The Tomb.” Deceived and wrongly imprisoned, Ray Breslin (Stallone) must recruit fellow inmate Emil Rottmayer (Schwarzenegger) to help devise a daring, nearly impossible plan to escape from the most protected and fortified prison ever built.

“Escape Plan” is quite the beast of a film. It cost $70 million and it looks quite awesome.  It arrives on Blu-ray as a combo pack with Blu-ray + DVD and Digital HD UltraViolet. The 1080p transfer really looks great and the high-tech prison is very polished looking. The DTS-HD Master Audio 5.1 track works great with the non-stop action and even work up my daughter upstairs (sorry sweetie). When it comes to these action films you cannot help it but amp it up to 11 and test to see what these audio tracks can do.

In terms of special features, the film packs some decent extras. There is an audio commentary with Director Mikael Hafstrom and Co-Writer Miles Chapman. A little technical but still informative. There are three featurettes are included. “Executing the Plan: The Making of Escape Plan” goes behind-the-scenes in the production. “Maximum Security: The Real-Life Tomb” looks into how they built this prison. “Clash of the Titans” looks into bring our two leads together. Lastly there are a few Deleted Scenes included.