“Geek, author, guitarist, icon: when it comes to recounting the history of metal, SCOTT IAN is the man – catch him while you can.” – Alex Milas, Editor, Metal Hammer 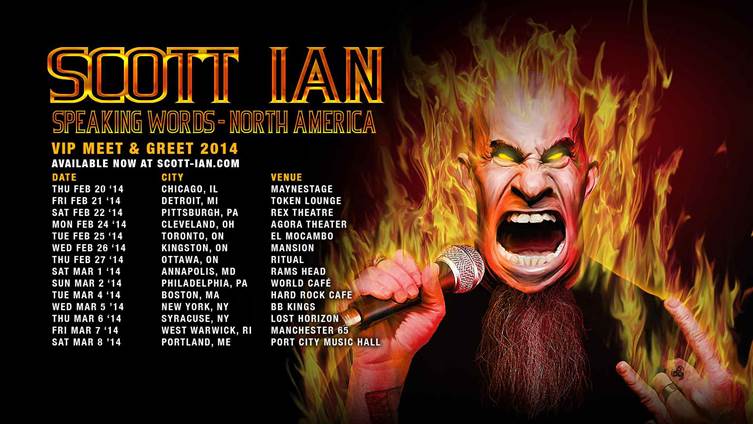 At this point, it’s no surprise to anyone that legendary heavy metal musician, author, and television personality SCOTT IAN has a lot to say. After decades-worth of international touring with Anthrax, bumping elbows with illustrious (and sometimes ridiculous) characters all over the media spectrum, and undergoing general “you won’t believe this” experiences— SCOTT IAN certainly has some hilarious and surprisingly personal stories to share.

Following the resounding success of the UK leg of his “Speaking Words” tour, Scott is picking up the mic again for a 15-city North American leg, kicking off in Chicago, IL on February 20th.

Don’t mistake this for your run-of-the-mill spoken word tour. In SCOTT IAN’s own words, “it ain’t no poetry reading” either. “Speaking Words” is an honest look at the insane life that Scott has led for the last 31 years, the people he’s met, and the events that coincide. During each show, Scott will take part in a special Q&A session with the audience.

SCOTT IAN adds, “England, Wales, Scotland, Ireland, Australia, Germany; I’ve been “Speaking Words” all over the world. My friends in the U.S. and Canada, you asked for it and now I finally get to bring it home! I’m looking forward to talking with ya, talking at ya and telling you some amazing tales of drunken debauchery and ridiculousness. No punches pulled, no swear word left unturned, and no question avoided in the Q&A. Let’s do this!”

A special opportunity to join a VIP meet & greet at each date is available now via SCOTT IAN’s webstore. This unique and limited event will allow you to spend time with Scott like never before. It’s a veritable post show hangout with a metal legend— one that’s sure to enrich your knowledge of not only all-things SCOTT IAN, but Anthrax and metal history in general. The VIP meet & greet also includes a special VIP laminate, banner, and other goodies. Learn more and get your passes here: http://bit.ly/1jXEPen

With a career spanning three decades, Scott is heralded as metal elite. As the co-founding member of Anthrax, SCOTT IAN helped to create the thrash metal genre in the 1980’s. Anthrax have sold over 10 million records worldwide, have multiple Gold and Platinum awarded recordings, multiple Grammy nominations and have toured the world over on roughly 90+ tours since 1984. SCOTT IAN is recognized as a constant and unanimously recognizable figure in the worlds of music, poker, comics, movies and television. Currently, SCOTT IAN hosts Blood & Guts for the Nerdist Channel, and along with Anthrax, is writing songs for their presently untitled 11th studio album, due out in 2014.

For more information on SCOTT IAN, please visit these websites: