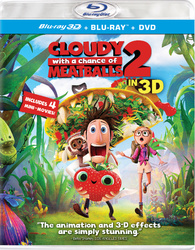 In the world of movies, it is good to stay in the mind of the consumer. “Cloudy With a Chance of Meatballs” was released in 2009 and it took till 2013 to release a sequel. When my wife say that this was coming out she asked is anyone still care about this movie. I thought that was a sign for what was to come. The film did not perform very well in the domestic box office, which I was not shocked. But after watching the film, and like the first one, I enjoyed it still quite a bit. If you’ve seen the first one then you remember how colorful and fun it was. The second film feels like a bit of the same copying the success of the film, which takes away points for originality, but is still quite funny and definitely a visual ride. A fun time for the whole family!

Official Premise: Inventor Flint Lockwood (Hader) thought he had saved the world when he destroyed his most infamous invention, a machine that turned water into food, resulting in cheeseburger rain and spaghetti tornadoes. But Flint soon learns that his invention survived and is now combining food and animals to create “foodimals!” Flint and his friends embark on an adventurously mouth-watering mission to battle hungry tacodiles, shrimpanzees, hippotatomuses, cheesepiders and other foodimals to save the world… again.

Sony delivered this film in a beautiful combo pack including a Blu-ray 3D + Blu-ray + DVD + UltraViolet digital copy. When I get a Sony 3D Blu-ray, I know that it is going to be amazing no matter what! They have always impressed me the most, even for a film like “The Smurfs 2”. Sony knows what they are doing with that technology and they always deliver. “Cloudy With a Chance of Meatballs 2” was visually amazing with a very strong 3D presentation. In fact, the first film was one of the film 3D Blu-ray’s that I owned and literally sealed the deal for me to get a 3D TV. The effects are great and there are a lot of fun and excited in-your-face moments, which the kids are going to love for sure. So to me I know we have a winner right there!

The 1080p transfer is easily going to be one of the best of the year. The animation is very well represented and just jumps off the screen whether you are watching the 3D version or not to be honest. The DTS-HD Master Audio 5.1 track also delivers a great viewing experience. The score is quite epic and really capture the action well and the musical numbers presented perfectly balanced. I have a 19 month old daughter, so right now she is obviously not going to be wearing 3D glasses, so the 2D version was the choice we went with and she was having a blast with this film. I have to give it to the fact that it is so visual. When you watch the film, you literally just say “Wow” out loud. In fact, that is exactly what my daughter did say when she first watched this.

The special features are a blast just like the film. There is plenty of great extras for the kids and also adults. First we get an audio commentary track with the directors Cody Cameron and Kris Pearn, which is a very informative and also entertaining track to enjoy for repeat viewings. There are four brand-new mini-movies including “Steve’s First Bath”, “Super Manny”, “Attack of the 50 Foot Gummi Bear” and “Earl Scouts”. There are two featurettes on the production design. The first is “Production Design: Back in the Kitchen” with the crew talking about the film from a visual aspect. “Delicious Production Design” features additional insight on the same topic from Production Designer Justin Thompson.

Next up there are some interesting featurettes on the visual effects in the film. “The Mysterious Sasquash” features VFX Supervisor Peter Travers talks a look into the hidden secrets of the film. “Anatomy of a Foodimal” features cast/crew as they discuss these digital characters. “Building the Foodimals” does the same but on more of a technical aspect with Senior Animation Supervisor Peter Nash. “Cloudy Cafe: Who’s on the Menu?” features cast/crew again talking about the film’s characters both returning and new. “Awesome End Credits” talk about the film’s well…awesome end credits with the people that created them. There is a music video of “La Da Dee” by Cody Simpson and a short behind-the-scenes into the making. Lastly there are four very short deleted scenes as well.