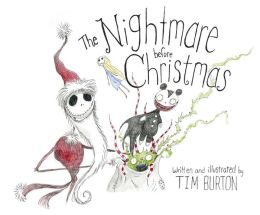 “The Nightmare Before Christmas” is one of my favorite films of all-time. I watch it over and over and never get tired.  Whenever August/September rolls around, I get the major itch to start watching it to get ready for the holiday seasons, including Halloween and Christmas.  I love the fact that it crosses over the holidays since just creates this new genre for itself. This book was released for the film’s 20th anniversary last month, yes I can’t believe either its been 20 years. I remember the first time I saw this film and was simply blown away. Tim Burton has such a unique perspective in this film and really set the scale for future stop-motion animated films. A must have for any fan of the film.

Official Premise: In this beloved picture book that could only come from the visionary mind of author and illustrator Tim Burton, we meet Jack Skellington– a well-intentioned inhabitant of Halloweenland. Jack is bored of “the scaring, the terror, the fright….tired of being something that goes bump in the night”. And so, in an effort to bring to joy to his town, Jack kidnaps Santa and takes his place as the jolly old elf. But instead of bringing joy to the world Jack, who is a little more than a grinning skeleton, brings fear by delivering creepy toys and riding a sleigh carried by skeletal reindeer. Only through a number of things going horribly wrong does Jack learn the true meaning of Christmas.

This 20th Anniversary Edition isn’t just a cash-in from Disney. It contains some updated illustrations from Tim Burton himself, including a new intro. you can tell that this project was such a labor of love for him and still is since he comments that he loved revisiting it. Now when it comes to the artwork in the book, which I loved but I am also a 31 year old man. For kids, it might be a little creepy but then again so is the film. I do not think that I will be sharing this with my 15 month old daughter…just yet but I look forward to introducing to her down the line. The words just rhyme so well and I really have a blast revisiting this timeless classic. Even though it is has been 20 years, I see myself revisiting this book and film, like Burton, for many many years to come!