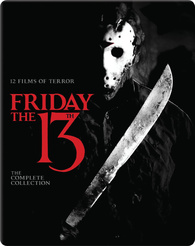 I have been a fan of the “Friday the 13th” series from when I was still in single digits, probably very too young. I have grown up with these films and have seen them all numerous time.  I love the character of Jason Voorhees, he has always been one of my favorite horror icons.  When I heard that Warner Bros was releasing this 10-set set with all of the films together I was very excited. As detailed started to emerge on the set itself, I started to gather mixed feeling about this set. As a die-hard “Friday the 13th” fan, having all the films on high-def Blu-ray for the first time in one collection is a real treat. Since we all have seen these films, I decided to keep the focus on collection itself and not the film. Besides a few neat collectables (more on those below), there really isn’t much of a major draw to upgrade from the “Friday the 13th: From Crystal Lake to Manhattan Ultimate Collection” DVD box set. In terms of “WOW factor”, this release does looks very sharp. The presentation is very snazzy but personally think those they could have gone one-step further and really given this set a little more love.

So on within this 10-Disc Set we have seven new Blu-ray debuts, which is pretty cool if you are a fan of the series. This set comes in a collectible tin case with 11 hours of previously released special features and a 40-page soft cover book. The book is actually excerpted from “Crystal Lake Memories: The Complete History of Friday The 13th”. The full length book highlights some of the 200 interviews, 600 photos, storyboards, concept art and more but if you are a “Friday the 13th” fan chance are youy own this already. So the idea of it is cool to have in a shorter mini-version but not a must own. Also included is a brand new, official Camp Crystal Lake embroidered Counselor Patch and pair of exclusive Jason mask 3D glasses included. Since we are on the topic, let’s this get out of the way. We are in the world of 3D Blu-ray’s, TV etc and yet for this release Warner has failed to update “Friday the 13th Part 3” in digital 3D, instead just included the already released boring and quite bad red/blue 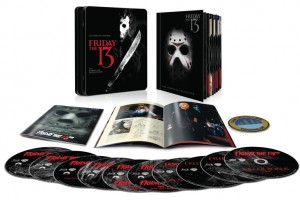 anaglyph 3D, which is very disappointing. When films like “House of Wax” from the 50’s is even getting a digital 3D upgrade, why did they feel that this would work with fans. I have to admit, this is one of the biggest let downs in this release.

The Killer Bonus DVD, which is ported over from “Friday the 13th: From Crystal Lake to Manhattan Ultimate Collection” DVD box set. This includes the featurette “Tales From the Cutting Room”, which includes deleted scenes and footage. There is an 8-part featurette “The Friday The 13th Chronicles,” which is great look into the history and legacy of this series. Next up is a 3-part featurette “Secrets Galore Behind The Gore,” which looks into the make-up effects. The featurette “Crystal Lake Victims Tell All!” is a group of cast/crew interviews from various films. “Friday Artifacts and Collectibles” looks into the props and collectables from the films. Lastly there are theatrical trailers. On the positive note, I was happy witht the fact that “Friday The 13th: The Complete Collection” also includes digital versions of all 12 films with UltraViolet™, to stream and download to smartphones TVs Blu-ray players etc. So to be honest this isn’t really much of an upgrade from the previous DVD set. We dp get (finally) a Blu-ray copy of “Friday the 13th Part 4” through “Jason X”, which haven’t been released yet individually but there are no other new special features included. So it comes down to how big of a fan you are of this series or if you have never owned the “Friday the 13th: From Crystal Lake to Manhattan Ultimate Collection” DVD box set.