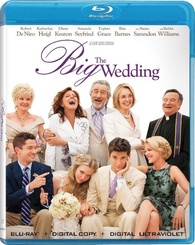 The draw for me with “The Big Wedding” is easily the film’s cast. Ensemble is calling it lightly. Here’s the list Robert De Niro, Diane Keaton, Susan Sarandon and Robin Williams along with Katherine Heigl, Amanda Seyfried and Topher Grace. Not to shabby huh? I am not a huge fan normally of situational comedies, like “Meet the Parents” etc. but I figured I would give it a chance. It is not perfect but it has a few good laugh out loud moments. I would recommend this as a renter but to be honest it is worth seeing just for the dynamic of this wonderful cast. Plus it is rated-R, so it has a little edge as well.

Official Premise: A charmingly modern family tries to survive a weekend wedding celebration that has the potential to become a full-blown family fiasco. To the amusement of their adult children and friends, long-divorced couple Don and Ellie Griffin (De Niro and Keaton) are once again forced to play the happy couple for the sake of their adopted son’s wedding after his ultraconservative biological mother unexpectedly decides to fly halfway across the world to attend.

The Blu-ray presentation from Lionsgate delivers as much as it can being a comedy on Blu-ray. It is being released just as a Blu-ray no combo pack or digital copy included. The 1080p transfer is clear and the DTS-HD Master Audio 5.1 track works with the film’s comedic jokes. There is only one special feature included on the Blu-ray, which is a little sad due to all the talent involved with this film. “Coordinating The Big Wedding” is a featurette on the film production and gives a short but decent insight into it with cast/crew.