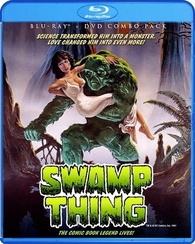 I have always loved “Swamp Thing” growing up as a kid for two reasons…Adrienne Barbeau. The film itself is based on the 1970’s charcter from the DC Comics Universe. The approach to the series was very campy but I aalways though that “Swamp Thing” could have been a killer horror movie, done very dark and deep New Orleans-like. The film is directed by horror director Wes Craven (“A Nightmare on Elm Street”) and he did a good job with what he was given to work with. First thing I wanted to know with this release was if it was the uncut international version or the MGM cut version. Unfortunately, it is the latter. Shout! Factory was unable to get the uncut version due to legal reasons, which is a bit of a let down. Nonetheless, the film itself looks great and Shout! tried its best to deliver a great release. A must for any fan!

Official Premise: Deep in Florida’s darkest everglades, a brilliant scientist, Dr. Alec Holland (Ray Wise), and a sexy government agent, Alice Cable (Adrienne Barbeau), have developed a secret formula that could end world hunger and change civilization forever. Little do they know, however, that their arch nemesis, Arcane (Louis Jourdan), is plotting to steal the serum for his own selfish schemes. Looting the lab and kidnapping Cable, Arcane douses Holland with the chemicals and leaves him for dead in the swamp. Mutated by his own formula, Holland becomes Swamp Thing – a half human/half plant superhero who will stop at nothing to rescue the beautiful Cable and defeat the evil Arcane…even if it costs him his life!

Shout! Factory gave “Swamp Thing” some impressive love with its 1080p transfer within it’s aspect ratio of 1.85:1. I felt like certain scenes were better than others but overall it was impressive. The DTS-HD Master Audio Mono rack works well with the dialogue and the action scenes. Shout! delivered this release as a combo pack with both a Blu-ray and DVD included. There are some good new special features included on this release as well. Key word new special features! There is a brand new audio Commentary track with Writer/Director Wes Craven, which I really recommend. There is also an audio commentary with Makeup Effects Artist William Munns. There are great individual interviews with Adrienne Barbeau, Reggie Batts and “Swamp Thing” Creator Len Wein. Lastly, there are some Photo Galleries included.