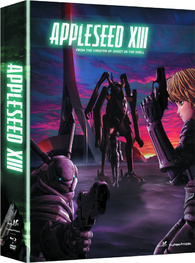 “Appleseed XIII” is the new Japanese CGI anime adaptation of Masamune Shirow’s 1985 science fiction manga series “Appleseed”. The series consists of 13 episodes (if you didn’t get that from the title). The series focuses on the exploits of ES.W.A.T. members Deunan and her cyborg partner Briareos and stays pretty close the original manga stories. The series was produced in association with Production I.G, aka the makers of “Ghost in the Shell”. I am a big fan of “Appleseed” and I am glad to see this series get some new life. I wish it wasn’t returned to 13 episodes but it still works and it is a blast for fans looking for more.

Official Premise: In the wake of destruction from a worldwide non-nuclear war, the city of Olympus has become the control center of the world. As humanity adopts biological enhancements in attempts to achieve perfection, a terrorist organization uprises to prevent what could be the eventual extinction of the human race. Two former LAPD SWAT members join a special mech-piloting, military force to take down the leader of the terrorist organization.

Funimation gave this OVA series a lot of love.  This limited edition Blu-ray release comes in a very sharp hard case with two cases, one for the Blu-ray presentation of this show and the another for the DVD. This is a typical “complete series” release from the studio and is very impressive. The 1080p transfers on the episodes look fantastic and work very well with the CG animation style and non-stop action for this series.  There are two audio tracks included, both which are Dolby TrueHD 5.1.  Like I mentioned above, I am fan of the English track due to the voice talent that is included.  But both of them are comparable and very impressive to satisfy either type of fan.

The special features are pretty awesome as well, just like the series itself. There are two audio track for two episodes. Episode #7 features Mike McFarland, Ian Sinclair and Monica Rial, which is a complete blast to listen to and adds a lot to the episode itself. The second is with Episode #12, which features Colleen Clinkenbeard and David Matrenga, also very informative and a must listen for fans. “The Inside” is a crazy long nearly two and a half hour behind the scenes look at the making of each episode. Plain and simple…this is awesome and highly recommend! Lastly there is a U.S. Trailer, and a Textless Opening and Closing Theme.