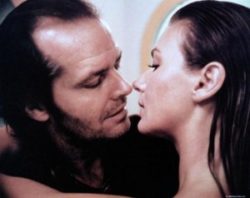 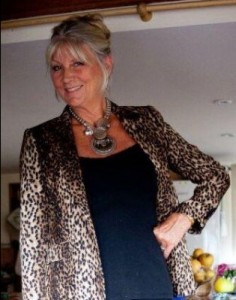 You may not know the name Lia Beldam, but you will know her by her work. She played a very important scene in Stanley Kubrick’s “The Shining” as the woman in Room 237 and that seduces Jack Nicholson in the film. After the film, Lia never got into acting full-time as she was already modeling. Media Mikes had a chance to track down Lia and ask her a few questions about the film and reflecting on her role.

Mike Gencarelli: Let’s start at the beginning, how did you get involved with “The Shining”?
Lia Beldam: I was a model. My agency were asked to send some people for the ballroom scene a movie called “The Shining”. So I went along thinking I would be in this ballroom scene. Prior to that, I had done a lot of nude shots for commercials and someone from the film saw them and said that they could cast me for another role in the film. I said “Sure”, since I didn’t have a clue what the film was about anyway. I went in to audition and didn’t even have to undress, so that was easy. And that is how I got the job.

MG: Did you know the extend of your scene before signing on?
LB: I knew it was a nude scene and that I wasn’t going to be in the ballroom scene. I had no idea what “The Shining” was about. They just told me it was be a nude scene and I was perfectly fine with that.

MG: How was it working with Jack Nicholson in your scene?
LB: He was very nice. As you know, I am not an actress. My main job was and still is modeling. I told him that he needed to help me. He said he would sit with me and discuss the shot. He was just very nice and absolutely charming.

MG: Tell us what it was like being directed by the legendary Stanley Kubrick? 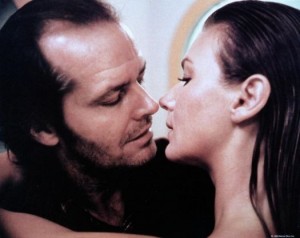 MG: Did you have any interactions with Billie Gibson aka “Old Woman in Bath”?
LB: Yes I did. I believe she was about 74 at the time when we shot and was a friend of the Kubrick’s. She wasn’t an actress either. She just did it as a favor to them. She was very nice.

MG: How long did it take to shoot the one scene?
LB: It was ridiculous. I tell you what Mike, it took a whole week. Very often though, it was long waits for me sitting my dressing room. They would change something in the set whether it was the carpet or something else. It wasn’t the actually shoot itself although he did do many many different takes. I didn’t mind the many takes though since I was enjoying kissing Jack Nicholson, that was sure [laughs]. I was paid for a whole week so I was there for a whole week. It was just wonderful.

MG: When you completed this role, did you ever think that we would be still talking about it over 30 years later?
LB: Not particularly no [laughs]. My son recently put up a picture up for me online with me and Jack Nicholson and since then I have been contacted quite a bit. But I really enjoy it and it has been great fun. 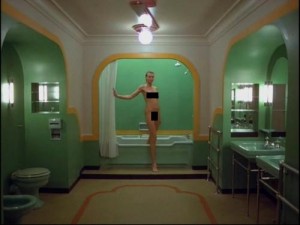 MG: After this film and not being an actress, why didn’t you pursue more acting gigs?
LB: I just pursued modeling. I had some very good jobs and I just loved it. I did a few very little bits in films but nothing special at all after “The Shining”. Models are always asked to go on films to bulk out scenes. It would have been lovely if someone had asked me to do more films but they didn’t. So I just kept on working as a model and was completely happy.

MG: Have you ever considered attending horror conventions to meet fans?
LB: Never. I didn’t even know what a convention was until recently. I have never be asked to do anything like that. I live in a very tiny village in the middle of nowhere in England and I have never thought about those things. Sounds like fun though!