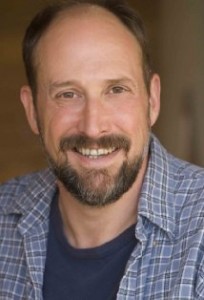 William Salyers is a stage actor that got thrown into the world of voice acting with his role in Adult Swim’s “Moral Orel”. He is currently the voice of Rigby in Cartoon Network’s “Regular Show”. The show, which won an Emmy last year, is continuing to grow as it enters its fifth season. Media Mikes had a chance to chat with William about his role in the show and about the fandom surrounding it.

Mike Gencarelli: Tell us what made you want to get into voice acting?
William Salyers: I kind of slipped into it acually. I never really planned to be a voice actor. I have been a stage actor for most of my life. Over the years, I’d be doing regional theater and someone would ask me to local commercial or two. I would do it but never thought of it as a destination for me. Going on 10 years ago now, I was here in LA and a friend of mine Scott Adsit, who was one of the co-creators of “Moral Orel”, contacted me when they working on the first season. Scott called me up and said they had the first season in the can but they had a voice that they weren’t happy with. I had no voice career and I thought it was not worth my time. But I figured it was a friend trying to throw another friend a bone. So I remember during my read through with the show’s creator Dino Stamatopoulos, he told me not to worry since “You’ve done voice over before right?” and I said “No, not really”. [laughs] I knew it wasn’t going to go anywhere so I wasn’t trying to lie. So I was completely relaxed when I read for the part of Reverent Puddy. Scott called me a day or two later and said “Network loved you…you’re in!” So that was the beginning of it.

MG: Was that a challenge going from theater to voice acting?
WS: I am sure you can find people that disagree but I think that stage training is a challenge, especially if you are playing the lead. You have to pick up a show, put it on your shoulder and

carry it for two hours. I think that is fantastic training for anything whether it is film, TV or even voice over because you have already learned how to create and span that character and then the rest of it is all technique. I certainly do enjoy it and consider it a natural extension of what I have been trying to do my whole life.

MG: How did it come about for you to voice Rigby on “Regular Show”?
WS: With “Regular Show”, I didn’t know anyone involved with the project. “Moral Orel” got me legitimized into the world of voice over and got an agent. So I got an audition one day from Cartoon Network for this pilot. I didn’t even understand what I was reading for at first. Besides that I knew the character was a raccoon. I remember one of the lines I had since I had no idea what it meant. It was “Chew ties you don’t know what I am going to throw next baby”. I thought what kind of ties are they talking about “neck ties, railroad ties…what are we talking about here”. Based on the way the dialogue was written, he seemed a little hyper active to me, so I delivered the line like this [speaking in Rigby’s voice] “Chew ties you don’t know what I am going to throw next baby”. From the audition, I booked the pilot.Actually, I had to audition again once the pilot got picked up. So I booked Rigby, not once but twice. The second time they called me to audition for the part, I got to do the hamboning bit which is probably one of my favorite bits of Rigby’s as we are going on five seasons now. I went to town with that. I knew it was a good sign when I saw J.G. (Quintel) laughing in the booth. So that is how that came about.

MG: Working with the show’s creator J.G. Quintel (who also voices Mordecai), do you find that you have a lot of creative freedom?
WS: Voice over really is a very precise art. You have people creating how you are going to look while you are deciding how you are going to sound. Within that though, I do feel like I have a lot of freedom. I am not just blowing smoke but I find that working with J.G. is really such a treat. It is remarkable to see a guy be so successful while also being so cool. If he loses it, I have never seen it. And you know he has tremendous pressure around him. Over the five seasons, we have developed a great rapport. We can usually knock out a scene in one or two takes since we have been working together so long.

MG: Are you surprised with the success and fan base surrounding this show?
WS: Oh my God! Yes, absolutely. I continue to be and remain surprised. I knew it was hilarious when I started working it. But there is a larger question though of if the show is going to tap into a specific demographic, let alone multiple demographics like this show has. You have dads in their 30’s laughing at this show with their kids. J.G. has achieved that. I remember last year when we went to San Diego Comic Con, the entire Cartoon Network booth was “Regular Show” themed. So they had a giant blow up parade 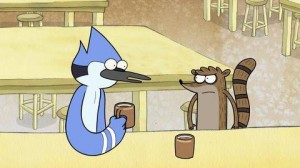 float version of Mordecai and Rigby in the golf cart. You could see it across the whole convention center. So that was overwhelming. I have had to get used to that sort of thing. I am not what you would call an extrovert. I am more of an introvert. It is still kind of stunning for me to be ousted as the voice of Rigby and see all of these people lining up to meet me and wanting autographs. The fans are really great though. It has just been mind-numbing.

MG: After 120 episodes, what keeps it fresh for you?
WS: So far there hasn’t been an episode that my character hasn’t been in. Even if he might spend most of it in a coma…he is there [laughs]. I will tell you honestly Mike; the key is that when I get a storyboard, which is weekly, I am laughing out loud. Our writers are phenomenal and that is what does it for me.

MG: After winning an Emmy last year, what can we expect from the show next?
WS: I can’t speak in specifics but in round terms, I can say that J.G. and the staff are looking for more opportunities to writing extended shows. Half hour shows. He is interested in exploring how the characters are maturing including some major life changes and what that would do to the show. We also continue to have amazing guest stars. As the show gets more and more popular it just keeps growing.  We continue to get some fantastic people who want to be interested in working on our show. I think it is going to be bigger and better.