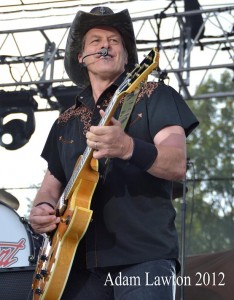 The Motor City Mad Man Ted Nugent is prepping to hit the road again as part of “The Midwest Rock ‘N Roll Express”. His notable tracks include “Stranglehold”, “Cat Scratch Fever”, “Wango Tango”, and “Great White Buffalo”. After the tours successful summer run Nugent, Styx and Reo Speedwagon are back together again to bring their legendary sounds to the masses. Media Mikes had a chance to talk with “The Nuge” about the upcoming tour and the possibility of a new Damn Yankee’s album.

Adam Lawton: What was it that first interested you being a part of the “Rock N Roll Express” Tour?
Ted Nugent: When you are fortunate to be blessed with a band of such gifted, passionate, gungho musicians like Mick Brown, Greg Smith & Derek St Holmes, you just know that the musical joy & adventure that is guaranteed every night is what dreams are made of. Magnify this with the accumulated energy, spirit & attitude of the REO & Styx boys, and how could anyone possibly turn it down.

AL: What are you personally most looking forward to about the second run of shows?
TN: What my band delivers every song, every concert, every night is the highest of highs. The raw animal celebration of our audiences creates a powerful force to reckon with, so every concert has a life of its own. Such forces drive me into uncharted territory on the guitar each night that is absolutely compelling and inspiring. 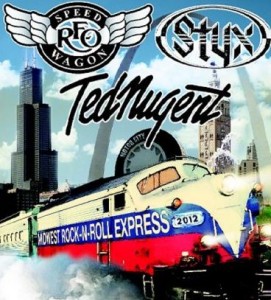 AL: Do you have anything different planned for the set this time out?
TN: We are still performing as many classics as we can squeeze in every night, but we are also reaching back for some deeper and more recent songs like QUEEN OF THE FOREST, CRAVE, TOOTH FANG & CLAW and FRED BEAR that are a riot to perform. Plus we are trying very hard to figure how we can get Mick to drive a golfcart onto the stage each night. That is so much fun.

AL: With all the recent legislation directed towards firearms and such will you be bringing the bow and arrow on stage for this run?
TN: Yes. My assault bow is such an interesting and always controversial topic of discussion and we know it to be a fascinating and always funny stage maneuver.

AL: Are there any new “Uncle Ted” projects in the works? Maybe something with Damn Yankees or a new solo album?
TN: I am creating wonderful fun pieces of music all the time, but the damn calendar is so constricting! You never know.