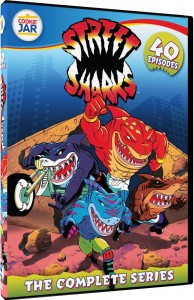 DIC Entertainment was responsible for much of my TV “babysitting” time when I was growing up with shows like “The Real Ghostbusters”, “The Super Mario Bros. Super Show!” and “G.I. Joe”. “Street Sharks” always interested me since I have been a lifelong fans of anything related to sharks.  Of course they show is very silly and far-fetched…but aren’t all cartoons.  This show turns four regular guys turned into sharks due to “gene-slamming” from..you guessed it…any evil scientist. Ripster was always my favorite being a great white shark.  Jab was a hammerhead. Streex was a tiger shark. Last but not least was Big Slammu, who was a whale shark. Do you really need more that that to draw you in…nope! The show is simple, very colorful and just brute action-packed fun.  This wasn’t the best thing to come out the 90’s but still worth checking out on DVD, especially for the cheap price of under $10 bucks for all 40 episodes! No brainer!

Official Synopsis: Shark N’ Roll with all 40 episodes of your favorite fresh water sharks! When an evil genetic-engineer, Dr. Paradigm illegally experiments with an untested DNA genetic formula, four brothers are accidentally transformed into monstrous half shark – half humans! Delighted with his success, the diabolical madman seeks to alter nature and tailor all humanity into sea creatures of his own design and control! The Bolton brothers – John, Bobby, Coop and Clint – team up to stop Dr. Paradigm and his deadly Seaviates from transforming the citizens of Fission City into mutants with no free will. So hold onto your fins as the heroic Street Sharks kick some serious fin as well as satisfy their voracious appetites in ALL 40 Jawsome Episodes!

Mill Creek Entertainment did a nice job with the casing and delivery of the release.  The episodes haven’t gone under a 4K restoration or anything but they look and sound good enough for me, especially on DVD. Honestly, I am just glad to be able to own this complete series for the first time on DVD. The only special features on this DVD release is a bonus episode include for the short lived 1988 series “C.O.P.S.” aka (Central Organization of Police Specialists). The episode included is called “The The Case of the Boy Who Cried Sea Monster” and aired originally all the way back in October of 1988 (which I actually remember…feeling old).  If you were a fan of “Street Sharks” in their original run, then you would recognize this show more as “CyberCOPS” when it re-aired back in 1993. Not really relevant as an extra, I would have thought that “Extreme Dinosaurs” would have been a better fit but still cool to see this show again after all these years.