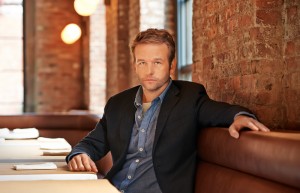 Dallas Roberts is known best for playing the scientist Milton Mamet in season three of “The Walking Dead”. He is also the star of the new supernatural thriller “Shadow People”. Media Mikes had a chance to chat with Dallas about his new film and his favorite part of working on “The Walking Dead”.

Mike Gencarelli: What drew you to work on the film “Shadow People”?
Dallas Roberts: I was really drawn to the suspense aspect of the film. It is a thriller with out having to be gory. It felt grounded in the mythology of the story behind it. Once you start to read about it and you find yourself getting sucked in. It will get inside of your head real quick.

MG: Did you do research into SUNDS and the true story behind the film?
DR: Yes, I did my actor’s research. I didn’t pay much attention to the radio story. I wanted to play the part rather than reflect it. Those 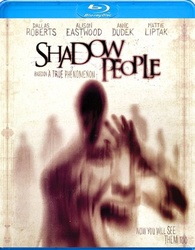 figures have been involved in mythology in many different cultures for a long long time. That is what I really found very fascinating. I also did a lot of reading about it. The belief that your brain does manifest your reality, I found that to be a really interesting exploration of that idea.

MG: Tell us about your character Charlie Crowe?
DR: He is a local radio personality, back when that was possible before the corporatization of radio like satellite radio. I run this late night paranormal discussion talk show. I tried not to follow the events and really stick with the character in the script.

MG: With “Shadow People” and “The Walking Dead”, what attracts you to the horror genre?
DR: Everybody loves to get those jolts in their seats. I have kids and there is nothing more fun than when we are watching a movie and something shocking happens and it sends them for a jolt. That immediate response to something is addictive. What you are looking for there is that sort of icy chill and sudden intake of breath.

MG: What has been the highlight for you working on “The Walking Dead” this season?
DR: I would have to say David Morrissey. He is an incredible actor and very fun to work with. We have a barrel of 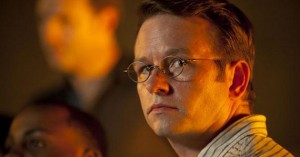 laughs the whole time. It is funny, when I signed up to be on “The Walking Dead” up to that point it had been people in the woods fighting for survival. I was sort of set down in a place where it took a long time for Milton to get some dirt on him…let alone blood. Hanging out with David has been very fun.

MG: What else do you have in the cards?
DR: I am around in “The Good Wife” every now and then. I got a film called “The Dallas Buyer’s Club”, which should be coming out soon. Then we are just putting together the pieces on whatever is going to happen next on “The Walking Dead”. One foot in front of the other, as they say.