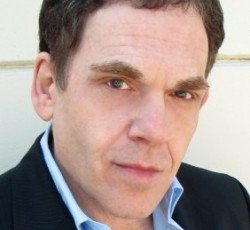 Charles Fleischer is known best as the man who gave the voice to Roger Rabbit” in the film “Who Framed Roger Rabbit”, which is celebrating its 25th Anniversary this year. The film is also debuting on Blu-ray for the first time on March 12th. Besides voice acting, Charles is also a stand-up comedian and also has two patents including a device to measure the golden ratio He has also invented and patented a Toy Egg. Fleischer is also the author of “The Moleeds,” a book of his own mathematical theories. In 2010, Charles spoke at the TED conference and discussed about his unique theory of everything called “Moleeds”, read more on that below. Media Mikes had a chance to chat with Charles to reflect about his role in “Who Framed Roger Rabbit” and also get to find out his love for science.

Mike Gencarelli: What do you think it is about “Who Framed Roger Rabbit” that makes it so unique and holds up over the last 25 years?
Charles Fleischer: It all goes back to good storytelling. It links to the job of the director and that was Bob Zemeckis. He is a genius director and a master storyteller. You combine that with the animation skills of Richard Williams and the script by (Peter) Seaman and (Jeffrey) Price and then on top of that your introducing a new cartoon character. Certain films are just classics and hold up through time and I will certainly say that “Who Framed Roger Rabbit” is one of those.

MG: We spoke with Christopher Lloyd a few years back, read here, and he said that you voiced the role 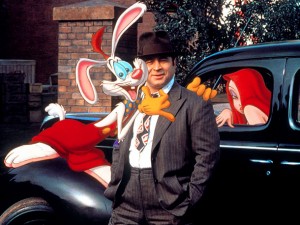 off screen, was that a difficult task?
CF: It wasn’t necessarily difficult but it was slightly different. We rehearsed face to face and I even had them make a full costume. Then I would be off-camera and I would watch exactly was (Bob) Hoskins was doing. If he reached out and grabbed Roger, I would have to reach like I was being grabbed while performing. It was a kind of performance I named “T.P.A.”, which is Trans Projectional Acting. Where you are there but you are projecting your performance from another space.

MG: Since we are going back 25 years, let’s go all the way back. What was your audition process like for this film and the creation of that wonderful voice?
CF: I was originally called in to help them find the Eddie Valiant character. They needed someone to read Roger off-camera when they did the screen-tests. After doing several of those Bob Zemeckis asked me if I wanted to do the character for the film and I said “Gladly”. So once I got it, I got to read the whole script, got to see some animation tests and I was able to find tune the voice into something that would be appropriate.

MG: How does it compare to your various other voice roles including “Rango” and “The Polar Express”?
CF: Nothing compares to “Roger Rabbit” [laughs]. That pretty much also goes for any role that I have played from “Zodiac” to “Night Shift”. The essence of Roger Rabbit is the closest to who I am. I am a stand-up comedian, I make people laugh and that is what I love to do. I felt this certain kinship with the elemental aspects of 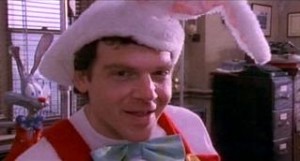 Roger Rabbit, which made it more important to me. On another note, his wife was Jessica Rabbit and my youngest daughter is named Jessica. One of my favorite scenes in the movie is when Roger is in the Alley sitting on a trash can and he is brokenhearted about Jessica playing patty cake. Just the fact that the name Jessica had an emotional sympathy within me that created this resonance that added to the whole projection of my acting dynamic.

MG: I always thought that you must have had no voice after shooting this film with all the screaming.
CF: Well it is a cartoon scream, so it doesn’t hurt you.
MG: Oh ok, I didn’t know that.
CF: Me neither. I just made it up [laughs].
MG: You got me man! [laughs]

MG: Word was released last month about “The Stooge” with Mickey Mouse & Roger Rabbit, have you been approached to reprise?
CF: I think that was a lot puffery. I do not think that there is any substance to that. I think that is the strategy that they were trying to use by putting it out there and see what people think and if they want it. I would suspect that any subsequent Roger Rabbit film would have some like Robert Zemeckis involved. 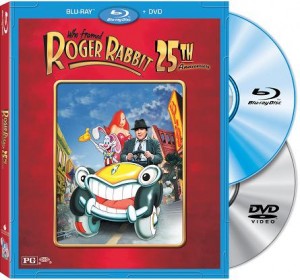 MG: Speaking of that, I have heard about talks of “Who Framed Roger Rabbit 2” for as long as I can remember, what do you think is the reason why this never happened?
CF: I think there are a number of reasons. I think one of the main reasons is that at the time it was co-produced by Disney and Amblin Entertainment. So to get both parties on board would be a challenge. It is all speculation. I can only say that eventually I hope they get around to making it because I believe there is a market.

MG: Off-topic, but can you talk a little about your unique theory of everything called “Moleeds”?
CF: You just touched my heart now we can talk now [laughs]. This is very important to me. Moleeds is something that I have been working on for over 30 years. It is a mathematical discovery that deals with prime numbers and creates patterns and relationships that I believe have some significance with the DNA of the universe. I did a talk on TED, check it out below. A mathematican in Vienna saw that and I started corresponding with him. He created these programs for me which allowed me to visualize moleeds on higher levels. The prior work that I had done was just on a calculator and making graphs on the computer. He was able to create these formulas based on my research that allowed you to plug in any prime number and see the symmetrical system that would be generated by moleeds.

CF: Since we are on science, I have another discovery which has to do with gamma ray bursts. I wrote a scientific paper, which was published on the Cornell University’s website. In order to be published there you need to be endorsed by a published scientist. Gamma ray bursts are the largest display of energy in the universe. I found patterns that indicate that they are not random, which if I am correct will change science!