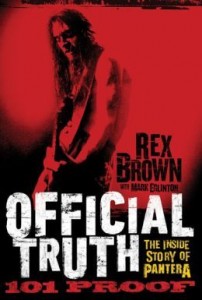 Have you ever wanted to hear the real truth about your favorite band from the people who were really there? Sure there have been other books that have tried to bring in elements of truth while skirting around the stuff fans and people on the outside really wanted to know. Well here is your chance to get whole truth and nothing but. Rex Brown former bassist for the Grammy-nominated, platinum selling heavy metal group Pantera has just released “Official Truth, 101 Proof The Inside Story of Pantera”. The memoir is a tell all book that not only tells Rex’s side of things but also incorporates stories from Rex’s friends and family that were present while one of the biggest bands to come out of the 90’s slowly began to break apart at the seams.

Candid, brutally honest, and at times shocking Rex Brown touches on everything and pulls no punches while doing so. Very rarely do you get the true grit out of a memoir however this one is the exception. Not only do you get the inside track on one of the biggest metal acts of all time you get to hear it from multiple sources that were there and can confirm what is being said. I found this book to be a breath of fresh air in a market that is saturated with half hearted  tell all’s that do nothing more than restate the facts the most people already know. Brown’s prologue alone made the book great as it wastes no time delving in to the murder of Pantera guitarist/friend Dimebag Darrell and his feelings related to all the events leading up to and after that awful December evening in Columbus, OH. Nothing is off limits or taboo. From drugs and alcohol to troubles with other band mates Brown tackles these subjects head on and at full speed. Co-Author Mark Eglinton does a remarkable job capturing all of Brown’s emotion and dedication which until now have remained mostly unseen due to Brown’s tendency to shy away from the media.

From start to finish a great read. “Official Truth, 101 Proof The Inside Story of Pantera” is one of those books that you either can’t or don’t want to put down. Each chapter does a great job leading in to the next while keeping the reader on the edge of their seat. The book also contains some really great photos from Rex’s personal collection that for me was the icing on the cake. Even if you aren’t a fan of Pantera, Down or Rex’s current group Kill Devil Hill you will want to check this book out as the story alone is one of triumph, tragedy and moving on.

Be sure to check out Media Mikes exclusive interview with Rex Brown, here.