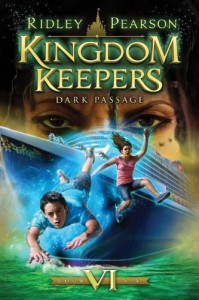 Even since the first “Kingdom Keepers” back in 2005, I have been in love with this series. There was something interesting about what happens when Disney goes dark. This series has developed so well since it began its adventure exploring from park to park with some really great plot twists and fun characters. I love the fact that Maleficent gets center stage as she is one of my favorites. In “Dark Passage”, we hit the seas on the Disney Cruise Line and various Caribbean islands. Since Disney is so vast, there is no shortage of where we can go with this series. I feel that this sixth book in the series is the most ambitious and has yet to disappoint. So don’t worry this series is not running low on steam and continues to grow strong.

Official Synopsis: The five Kingdom Keepers and their core friends have uncovered a startling truth: Maleficent and the Overtakers (Disney villains) are plotting a catastrophic event that could have repercussions far beyond the world of Disney. Aboard the Disney Cruise Line’s inaugural passage through the new Panama Canal, the Keepers and their holograms uncover a puzzle hidden within the pages of a stolen journal. The point of that puzzle will reveal itself in the caves of Aruba, the zip lines of Costa Rica, and the jungles of Mexico. A destructive force, dormant for decades, is about to be unleashed. The five Kingdom Keepers are to be its first victims.

Ridley Pearson really knows how to speak to his audience.  The book is aimed at the “Young Adult” audience but it doesn’t talk down to them.  He treats his fans like they are adults and that is why I feel that this series also draws in an older audience as well, like myself.  Plus who doesn’t like to read about a different side of Disney with new and our favorite character. Ridley Pearson has stated before that this series will contain seven books, which means that we are getting close to the end to the “Kingdom Keepers” series. I still would like to see this series transform into a TV series or feature film.  Maybe one day. I feel that there is a major audience for this. Either way, I will be on the edge of my seat to see what Pearson has planned next.