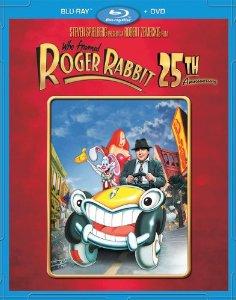 Wow, 25 years already? I remember watching this film as a kid over and over and over. Now here we are 25 years later and I am watching it with my own daughter. “Who Framed Roger Rabbit” is such an amazing film.  It really brings you back to the day before everything was all CGI and perfect.  The film definitely has it flaws since it is very ambitious blending animation with live-action.  This is before the days of “The Smurfs” or “Garfield”.  This took some real talent people to make this film work…and still work today. Disney did a pretty good job restoring this film for Blu-ray, but this lacks any effort in the extras department.  I thought it was missing a certain magic touch but still looks and sounds amazing and much better than I ever remembered, but Blu-ray today comes with high standards. If you are a fan of this film like myself you will enjoy this high-def upgrade. I recommend checking this out for sure.

I am not sure what I really expect with the Blu-ray’s 1080p transfer, I think I was expecting it to really pop more.  I really enjoyed watching it but I kept kind of sighing through certain scenes that still felt a little rough.  I will give it a little slack since the film is 25 years old. This new digital remaster still delivers a nice presentation. The DTS-HD Master Audio 5.1 audio track is quite impressive. You will be holding your ears for all of Roger’s screams and the constant toon-action. The dialogue is clear and the score flows quite well. Both the audio and video are major upgrades from the last DVD release.  The release comes in a combo pack also, so we can both a Blu-ray disc and a DVD of the film.

The special features are a decent but not really 25th anniversary material.  There is nothing new for this release just ports from the last DVD release. The only semi-upgrade is that “The Roger Rabbit Shorts” – “Tummy Trouble,” “Roller Coaster Rabbit” and “Trail Mix-Up” have been digitally restored and presented in high definition.  The rest of the ported special features are an audio commentary track from Director Robert Zemeckis, producer Frank Marshall, associate producer Steve Starkey, visual effects supervisor Ken Ralston and co-writers Jeffrey Price and Peter S. Seaman, which still holds up but I would have loved to see something new.  There is also two featurettes on the production, only in SD, “Who Made Roger Rabbit” and “Behind the Ears”, both worth checking out and have some good behind-the-scenes footage. There is one deleted scenes called “Pig Head Sequence,” with an introduction by the filmmakers. Then we have “Before and After”, which compare raw production footage with final live-action/animation shots. “Toon Stand-Ins” is a short feature on the rubber models used for stand-ins and “On Set!” which is a fly-on-the-wall look at the shoot. Good extras like I said but lacking the anniversary quality.