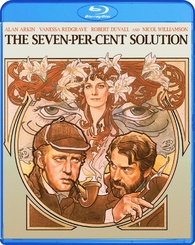 Putting Sherlock Holmes with Sigmund Freud in a movie together sounds like it would be a blast.  The film is decent with a good Blu-ray presentation from Shout! Factory. I loved the performances from Alan Arkin, Robert Duvall and Nicol Williamson.  Alan Arkin played Freud very well and that accent is a riot.  Robert Duvall is fun as Dr. Watson and Nicol Williamson plays Holmes very sharply.  He’s no Robert Downey Jr. but he’ll do (just kidding).  The script has it’s issues and the film runs a little long. Yet the film was still nominated for an Oscar for Best Screenplay, so maybe it was just me, but I like I said I still enjoyed it.

Official Premise: The world’s two greatest masters of the art of deduction, Sherlock Holmes and Sigmund Freud, meet for the first time in this delightful mystery adventure based on the best-selling novel by Nicholas Meyer. Stylishly directed by Herbert Ross, the film boasts a superb cast headed by Nicol Williamson as Holmes, Alan Arkin as Freud, Vanessa Redgrave as Lola Deveraux, Laurence Olivier as Professor James Moriarty, and, in a brilliant example of off-beat casting, Robert Duvall as Dr. Watson. To this ingenious tale of detection, addiction and abduction must be added the excitement of the chase – capped by a sword fight on top of a puffing locomotive roaring across Europe!

Shout! Factory delivered a nice Blu-ray presentation within the film original aspect ratio of 1.85:1. The 1080p transfer looks good but the colors feel a little dimmed, that could be that it was taken from an older master and not given much love during restoration. Still worth checking out if you are a fan of the film. The audio track includes a sweet DTS-HD Master Audio 2.0, which works perfectly for the sharp dialogue and fun score. The only special feature included is “When Sherlock Met Sigmund” with Nicholas Meyer.  It is an interview with Meyer chatting about the production and the film’s reaction over time.