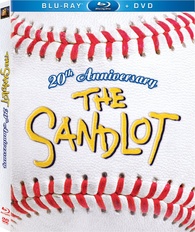 I remember watching “The Sandlot” in theaters when I was a kid and being inspired to play baseball. This year “The Sandlot” is celebration it’s 20th Anniversary. It is very hard to believe that this film has been around for 20 years. “The Sandlot” is one of those films that doesn’t get old and ages very well. Since this is an anniversary release, I was hoping for the anniversary treatment, especially since this film was already released on Blu-ray back in 2011, but was left disappointed with the release…but not the film obviously. In terms of Blu-ray, this is a same release from 2011 with a new slipcase. If you don’t own this yet then it will easily be worth the upgrade from DVD.

The game, the cast and the music. “The Sandlot” has everything a coming-of-age story needs to succeed. This film comes with wonderful performances from its nine terrific young actors and amazing supporting appearances from James Earl Jones (“Field of Dreams”, “Star Wars” series), Denis Leary (“Rescue Me”, “The Ref”) and Karen Allen (“Raiders of the Lost Ark”). I should point out that there is one new thing about this release that differs it from the 2011 Blu-ray this comes with limited edition packaging and 10 collectible cast baseball cards. The cards are fun if you are a fan of the film for sure (but still not worth a double dip in my eyes).

Official Premise: When fifth-grader Scotty Smalls moves to a new town with his folks, he strikes out with the neighborhood kids, because he can’t even throw a baseball until the leader of the local sandlot team shows him the ropes. It’s the beginning of a magical summer of wild adventures, first kisses, hilarious hijinks and fearsome confrontations with the dreaded “beast” that lives behind the left field fence. The Sandlot has major-league laughs for all ages!

“The Sandlot” comes with an amazing 1080p transfer just like the last Blu-ray release. The transfer is sharp and really captures the essence of the baseball field. The film also boasts a very impressive DTS-HD Master Audio 5.1 surround track. The dialogue is perfectly balanced and you can little here every swinging bat and scream from the Beast. The disc also includes an English Dolby Digital 2.0 classic track, but the prior is preferred. The special features are where the letdown really kicks in since it is an yet another port of the (lacking) bonus features from past DVD editions. There is a very featurette, which runs just over five minutes. Lastly (yes, already), there is the film’s theatrical trailer and some TV Spots.

In connection with the release, FHE will embark on a partnership with Benny the Jet’s favorite shoe brand PF Flyers, for a special one-of-a-kind promotion. Beginning March 26, a limited run of “The Secret Weapon,” will be made available inside a vintage 1960’s shoe box, along with a $3 SANDLOT coupon inside. The Blu-ray also features a 10% PF Flyer discount coupon inside the packaging. Further information on this exclusive purchase can be found at www.pfflyers.com.