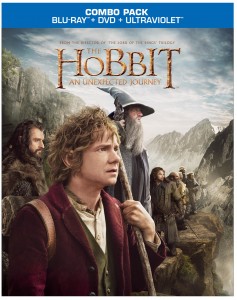 I am a huge fan of Peter Jackson’s “The Lord of the Rings” series.  They are easily some of my favorite films that if I see them on, I just lost a day since I can’t not watch them. “The Hobbit” was also quite amazing and one of my favorites from 2012.  There has been much speculation on whether it is up to par with the film’s that it follows and I believe that it is.  “The Hobbit: An Unexpected Journey” is the beginning of another trilogy with Peter Jackson behind all three.  This film is followed by “The Desolation of Smaug” and “There and Back Again”, which will be in theaters respectively in 2013 and 2014. So basically if you know J. R. R. Tolkien’s 1937 novel, which only runs just over 300 pages, that their is a little bit of embellishment here in order to span three films.  I like to look at “The Hobbit” as a way to lure us about to Middle Earth and get you ready for the following three films.  Is it as good as “The Lord of the Rings” trilogy…no, but did you really expect it to? Don’t forget what the power of a film earning a BILLION dollars will do! Stand alone, this is an amazing well-made film and I will be first in line for the next two and fingers crossed for an Extended Edition release in the future.  Be sure pick up this this first installment and begin your Hobbit collection! Keep ’em coming Peter Jackson!

Official Premise: The adventure follows the journey of title character Bilbo Baggins, who is swept into an epic quest to reclaim the lost Dwarf Kingdom of Erebor from the fearsome dragon Smaug. Approached out of the blue by the wizard Gandalf the Grey, Bilbo finds himself joining a company of thirteen dwarves led by the legendary warrior, Thorin Oakenshield. Their journey will take them into the Wild; through treacherous lands swarming with Goblins and Orcs, deadly Wargs and Sorcerers. Although their goal lies to the East and the wastelands of the Lonely Mountain, first they must escape the goblin tunnels, where Bilbo meets the creature that will change his life forever Gollum. Here, alone with Gollum, on the shores of an underground lake, the unassuming Bilbo Baggins not only discovers depths of ingenuity and courage that surprise even him, he also gains possession of Gollum’s “precious” ring that holds unexpected and useful qualities A simple, gold ring that is tied to the fate of all Middle-earth in ways Bilbo cannot begin to know.

This edition from Warner’s comes as a Blu-ray combo pack with a Blu-ray disc, a DVD copy and also an Ultraviolet digital streaming copy. When this film was released, there was a lot of focus on the 3D, since it was the first film to be released theatrically in the new 48FPS 3D (double the projection speed of regular 3D).  I had the privilege of seeing this film in 3D and I have to say it is really the way to go if you have the option.  Peter Jackson really sets up the Middle Earth to look amazing in the third dimension. Easily add a half a star to the film’s rating for the 3D added in. Nonetheless, the 2D version still works, it is just missing the added depth. I have to say Warner still delivers easily one of the best Blu-rays of the year in terms of audio/video.  The 1080p is stunning and absolutely crystal clear.  The DTS-HD Master Audio 7.1 surround track is a real beast.  Get ready to write that apology letter to you neighbors since this shit is going to break the windows and shake the walls.  The action and score are perfectly balanced and will blow your speakers if you are not careful.  You have been warned.

Now on to the special features, which are very disappointing for a release of this stature. There majority of these extras aren’t even new since they have been available online. I am assuming that they are either holding out for the extended edition or the inevitable trilogy collection.  “ew Zealand: Home of Middle-Earth” is a short look with Peter Jackson and the production crew of New Zealand being turned back into Middle Earth. Next is ten “Video Blogs” from Jackson that were available previously that were made to tease us during the production. They run about an collective two hours and are very fun and informative still but as the only main extra included, I am a big taken back. Here is a breakdown of the blogs “Start of Production (April 14, 2011)”, “Location Scouting (July 9, 2011)”, “Shooting Block One (July 21, 2011)”, “Filming in 3D (November 4, 2011)”, “Locations Part I (December 24, 2011)”, “Locations Part II (March 2, 2012)”, “Stone St. Studios Tour (June 6, 2012)”, “Wrap of Principal Photography (July 24, 2012)”, “Post-Production Overview (November 24, 2012)” and “Wellington World Premiere (December 14, 2012)”. There are also a few film and game trailers included as well. Lastly there is a sneak peak access code included for an exclusive online sneak peek at “The Desolation of Smaug”, hosted live by Peter Jackson on March 24th at 3pm EST/12pm PST.

The Hobbit: An Unexpected Journey available on Blu-Ray 3/19/13 at WB Shop http://bit.ly/WzQwcw