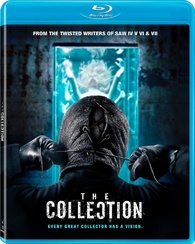 In 2009, Marcus Dunstan co-wrote and directed a horror film called “The Collector” along with Patrick Melton.  The two of them are no stranger to horror writing (Feast” series, “Saw 4-7”). They reunited on the sequel to “The Collector” called “The Collection”.  This film is much more brutal and in your face that the first go-round. There is something called excessive gratuitous violence and this film is not afraid to go there.  Is it too much? Maybe but this film is really sticks to its guns and is pretty fearless.  “The Collection” stars Josh Stewart (“The Dark Knight Rises”), the film also stars Emma Fitzpatrick (“The Social Network”), Lee Tergesen (HBO’s “Oz”) and Christopher McDonald (HBO’s “Boardwalk Empire”).  If you like films like “Saw”, then get ready cause this film will have you rooting for more yet at the same time cringing.

Official Premise: When Elena (Fitzpatrick) is talked into attending an underground warehouse party with her friends, she finds herself caught in a nightmarish trap where the revelers are mowed, sliced and crushed to death by a macabre series of contraptions operated by a masked psychopath. When the grisly massacre is over, Elena is the only survivor. But before she can escape, she is locked in a trunk and transported to an unknown location. Fortunately for Elena, one man-Arkin (Stewart) -knows exactly where she’s headed, having just escaped from there with his life and sanity barely intact. Elena’s wealthy father hires a crack team of mercenaries to force Arkin to lead them to the killer’s lair. But even these hardened warriors are not prepared for what they encounter.

“The Collection” looks actually quite stunning on Blu-ray courtesy of Lionsgate Films. The 1080p transfer delivers with its 2.34:1 aspect ratio. If you are not a fan of blood and gore then get ready but they in your face with this high definition release. The DTS-HD Master Audio 5.1 surround track really working with horror action and of course Charlie Clouser score. The special features are good as well. There is an audio commentary track with Director/Writer Marcus Dunstan and Writer Patrick Melton, whom are rather engaging. There are five Featurettes included on the production including “A Director’s Vision”, “Makeup and Effects of ‘The Collection'”, “Production Design”, “Special Effects of ‘The Collection'” and “Stunts of ‘The Collection'”. Lastly there are three alternate scenes and a theatrical trailer included.