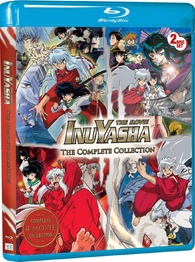 When I started watching “InuYasha” back in the early 2000’s, I was immediately hooked. I couldn’t get enough of the show.  I would watch episodes over and over just to get my fix while I waited for new episodes each week. These films are extremely epic and fit very well within the series. I also really enjoyed the show in the longer format. The typical 30 minute episode was great but I was always left immediately wanting to watch another episode. This is the first time that these films are available on “high-def” (more on that below) Blu-ray. If you are a fan of the show it should be a no-brainer in order to get your “InuYasha” fix.

So back to the beginning, in 2001, my prayers were answered with the first “InuYasha” movie. A movie version of my favorite anime? Count me in! The films fit right in between the series. The first movie took place between episodes 54 and 55. Luckily Sunrise was smart and replicated this success the following year in 2002 with the second film, which takes place between episodes 95 & 96. The same goes for the third film which came out in 2003 and ran between episodes 136 and 137.  The last film premiered in 2004 and premiered not too long after the last episode of the “InuYasha” aired.

InuYasha the Movie: Affections Touching Across Time: 200 years ago, InuYasha’s father sealed away a powerful demon from China named Hyoga. A Shikon Jewel shard awakens Hyoga’s son, Menomaru, inspiring him to absorb the remains of his father’s power to take control of the world. It’s up to InuYasha and his friends to stop this nearly invincible foe!

InuYasha the Movie 2: The Castle Beyond the Looking Glass: With their greatest foe seemingly defeated, Inuyasha and his friends begin to return to their lives. But their short period of peace is once again shattered as a new enemy begins to emerge. Kaguya, the self-proclaimed Princess from the Moon of legend, begins a plan to plunge the world into a perpetual night of the full moon. Inuyasha, Kagome, Miroku, Sango and Shippo must once again unite to face the new threat.

InuYasha the Movie 3: Swords of an Honorable Ruler: Many years ago, the Great Dog Demon wielded the Three Swords of the Fang. Upon his death, he bequeathed a sword to each of his sons, Inuyasha and Sesshomaru, leaving the third sword, the wrath-filled Sounga, locked away forever. Now that the Sounga’s power has been awakened, these two battling brothers must put away their sibling rivalry and face off against a force that spells doom for all mankind!

InuYasha the Movie 4: Fire on the Mystic Island: Within the dark recesses of Horai Island, a group of half-demons lives under the demonic rule of the Four War Gods. Escaping with barely a shred of hope, Ai, the youngest of the half-demons, returns to the island with Inuyasha, who must face not only the Four War Gods, but the past he left behind on the island fifty years ago.

Now onto the Blu-ray itself, Viz Media has done a wonderful job with releasing the latest series of “InuYasha: The Final Act” on Blu-ray prior to this. I was really hoping for the same thing with “InuYasha: The Movie – The Complete Collection” but was a left a bit disappointed.  The films are only presented in 1080i, which is technically high definition but it is a bit of a cop out for a Blu-ray release.  It still looks good with sharp colors and line details but you can see the difference clearly that it is not full HD.

The audio tracks are a step up from prior “InuYasha” releases.  There is both an English and Japanese DTS-HD Master Audio 5.1 track.  This is a step up from the releases for “InuYasha: The Final Set”.  The 5.1 tracks really capture the scale of these films and work with the non-stop action.  I have to admit, I couldn’t really choose a favorite track.  The Japanese works best with since it feels the most authentic but I love the voice cast with from the English dub as well.  There are also English and Japanese DTS-HD Master Audio 2.0 tracks.

So on this release, we get four films but really no major special features. There is only one extra on this release from any of the films, which would be “Production Sketches”.  I did enjoying looking at this artwork but I would have loved to seen much more.  There is no commentary tracks or featurettes included, which is very disappointing.  I am not sure what it is about anime Blu-ray releases but they never come with any decent special features.