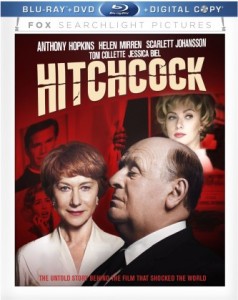 When I first saw Anthony Hopkins in make-up for the role of Alfred Hitchcock, I was blown away.  Kudos to my buddy Greg Nicotero and his team at KNB EFX on that wonderful make-up job (snubbed for the Oscars BTW).  I have always been a fan of the mysteriousness of Alfred Hitchcock.  “Psycho” is one of my favorite films of all-time.  I was thrilled to see the story behind the making of it. I know this film may not be 100% correct with the facts but it is very entertaining and packs some very impressive cast performances. The film is well-paced running just over 90 minutes but I was literally enjoying every second of it.  I loved Helen Mirren in it and in fact, Media Mikes awarded her with our Best Actress of 2012 award.  All around witty, interesting and just fun to be had here. Recommend to check this out.

Official Premise: Oscar® winners Anthony Hopkins and Helen Mirren* are spellbinding in this provocative story about the making of one of cinema’s most iconic films. Plagued by both a reckless ego and nagging self-doubt, Hollywood legend Alfred Hitchcock (Hopkins) becomes obsessed with a grisly murder story that the studios won’t back. Determined, he risks his reputation, his home and even the love of his wife Alma (Mirren), as he sets out to make the film. Ultimately, Hitch wins Alma over, and the two collaborate to create an enduring masterpiece – Psycho.

Fox is delivering this released as a combo pack with the Blu-ray disc, a DVD disc and also a digital copy of the film. The 1080p transfer for the Blu-ray looks great.  There are no noticeable flaws or issues that I was able to pick out. The colors are sharp and the picture quality is super clear. The DTS-HD Master Audio 5.1 audio track is also fantastic.  It works perfectly with the dialogue, which this film is quite driven by. It also works great with Danny Elfman’s score for the film.  Danny delivers a fun and very unique score, which is much different that we are used to for him.

The special features are very impressive for this release and come jam-packed.  First, there is a feature “Becoming the Master: From Hopkins to Hitchcock”, which showcased the transforming of Hopkins into character. “Obsessed with Hitchcock” and “Remembering Hitchcock” look into the phenomon behind the man. “Sacha Gervasi’s Behind the Scenes Cell Phone Footage” is fun to watch but remember it was shot on a cell phone. Speaking of cellphones’ “Hitchcock Cell Phone PSA” is included which aired in theaters prior to the films release. Next, there are three featurettes focusing on the the film’s story, the cast and the score with “Danny Elfman Maestro”, all three are great.  There is also a piece of “Hitch and Alma” from the film, as well as a deleted scene included.  Almost forgot that there is a decent audio commentary track with director Sacha Gervasi and Stephen Rebello, author of “Alfred Hitchcock and the Making of Psycho”, which is information packed.  Wrapping up these extras is a theatrical trailer.