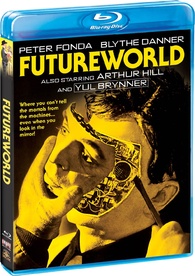 “Futureworld” is the sequel to the crazy science fiction thriller “Westworld” from 1973. Thanks novelist Michael Crichton, he created the high-tech Disneyland for adults known as Delos. Of course if you’ve seen “Westworld” you know that it isn’t all colorful songs and fun like the park. I have always been a big fan of “Westworld”, I loved the twist and it still makes me smirk today. “Futureworld” is a great follow-up and continuation of this story. It also boasts an amazing cast including Peter Fonda, Blythe Danner and the return of the amazing Yul Brynner, which was also his last film role. Speaking of “westworld”, that was also recently released on Blu-ray this month from Warner Bros, so be sure to get that as well.

Official Premise: Do you remember that disaster at Delos a few years ago when the Westworld robots went out of control and killed a few guests? Well, the entire resort has now been rebuilt and redesigned to be completely fail-safe. To combat the lingering adverse publicity, Duffy, the Delos representative, has offered the IMC Communication Network exclusive rights to the new Delos story. Tracy Ballard (Blythe Danner), the network’s top commentator, has been assigned the story with Chuck Browning (Peter Fonda), the newspaper reporter who broke the original Westworld disaster story. But as Tracy and Chuck’s private tour starts, they get the feeling the entire resort might not be as safe as Delos thinks…

Shout! Factory delivers a strong and sturdy Blu-ray release of this film. It is not perfect but it does the job and it is easily worth the upgrade from DVD. The 1080p transfer cleans up the film really well and looks solid within its 1.85:1 aspect ratio. The audio track included is also a nice DTS-HD Master Audio. It works well with the films action and Fred Karlin’s score. The special features included though are very disappointing for this release. It only includes a Theatrical Trailer, some Radio Spots and a Still Gallery, Hint to Shout! Factory, now we just need the short-lived 1980 television series “Beyond Westworld” finally released. Of all films that are screaming for a remake, this would be a great candidate.