Don’t miss out on one of the year’s hottest events with plenty of food and live music at the Downtown Food & Wine Fest at Lake Eola, Media Mikes is happy to giveaway Two Daily Admission passes.   If you would like to win this great prize, please leave us a comment below or send us an email and tell us what are you looking forward to most at this event. This giveaway will be open until February 8th.  One entry per person, per household. All other entries will be considered invalid. Once the giveaway ends, Media Mikes will randomly pick out winners and alert the winners via email.

The tradition continues as more than 20,000 foodies and wine lovers experience unique local cuisine paired with wines from around the globe at the Downtown Food & Wine Fest, Saturday, February 23 and Sunday, February 24, 2013. Located in the heart of downtown Orlando at Lake Eola along Robinson Street. The Fifth Annual Downtown Food & Wine Fest (previously known as The Orlando Food and Wine Fest) has established itself as a signature event for Orlando.
Tickets: Admission is $10 per person, per day with advance online purchase beginning January 15, 2013 at www.DowntownFoodAndWineFest.com.  Advance tickets are also available at Mercedes-Benz of Sanford, Mercedes-Benz of Orlando, and Mercedes-Benz of South Orlando. 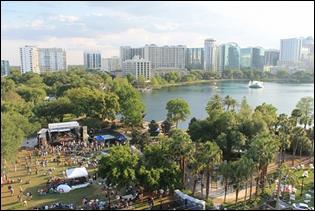 Admission at the door is $15 per person, per day. Admission for children under age 12 is free.  Food tickets are available at the event for $2 each; food and wine offerings range from one to four tickets.  New for 2013, VIP ticket packages include parking, a private pavilion, and additional Fest perks and privileges.   A limited number of VIP tickets are available only at Mercedes-Benz of Sanford, Mercedes-Benz of Orlando, and Mercedes-Benz of South Orlando.
The Fest is presented and produced by CBS RADIO, led by Orlando favorites MIX 105.1, 1059 SUNNY FM, and 102 JAMZ in partnership with the Florida Restaurant & Lodging Association.  Located in the heart of downtown Orlando at Lake Eola on Robinson Street, the two-day Fest features mouth-watering dishes from 40 of Orlando’s premier restaurants, domestic and international wines, and live entertainment.  A portion of the proceeds benefit Second Harvest Food Bank of Central Florida and the FRLA Educational Foundation.
“The Fest is the perfect combination of divine food, unique wines, and headliner entertainment right in the heart of downtown,” said Nicole Dipietro, participating restaurateur and president, Central Florida Chapter, FRLA.  “Orlando has emerged onto the national culinary stage with award-winning restaurants and memorable events to showcase the spirit of the City Beautiful.” Forty top restaurants are scheduled to present culinary tastings including the return of the 2012 Foodie Award winners as honored by a panel of Orlando elected officials, food writers and reporters, and celebrity chefs.
For more information on the Downtown Food & Wine Fest:
Visit www.DowntownFoodAndWineFest.com