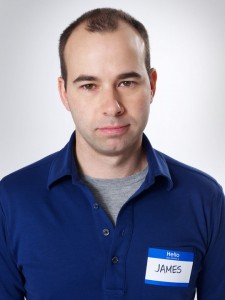 James Murray is star of truTV’s hit practical joke reality series “Impractical Jokers”. Better known as Murr, on the show he is with his best friends Joe Gatto, Sal Vulcano and
Brian “Q” Quinn. The show is just finishing its second successful season and building up a lot of steam behind the show. Media Mikes had a chance to chat with Murr about being a joker and his favorite moments on the show.

Mike Gencarelli: Let’s start with the origin of “Impractical Jokers”?
James Murray: The four of us all went to high school together, so we’ve been friends for over 20 years. We went to an all boys Catholic high school. So there wasn’t a way to be distracted besides playing pranks on each other. For as long as I can remember we have been doing that. I met Joe freshman year in religion class. Every time the teacher would walk down the aisle he would drop his nose on her without her realizing. We ended up doing that in the first season of the show also. A few years ago, we came together and decided to come up with an idea for a TV show. We have been performing together for years doing sketch comedy as The Tenderloins. We came up with the idea for an upside down prank show, where the jokes on us basically.

MG: Does it ever get too embarrassing for you to do what the guys tell you?
JM: I am sure. In the show we reject things all the time because it is too embarrassing. I think the fun of the show is seeing what our breaking points are and what we simply won’t do. My mother raised me to be a gentleman, there is just somethings I will not do or say [laughs]. And of course my best friends know every single one of the things that I won’t do or say.

MG: The show must be filled with outtakes, any cool off-camera moments? 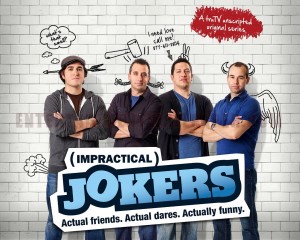 JM: I will tell you, there are some challenges we film that never see the light of day, for reasons we cannot anticipate in advance. Sometimes things seem funnier on paper then reality. Perfect example, last year we were filming this challenge and the idea was funny. We had to go to a children’s park where kids are playing and parents are pushing kids around in stroller. You know how parents baby talk to their kids? The challenge is you have to go to a parent pushing a kid in a stroller and baby talk to the kid and then baby talk to the parent and get them to do the same back to you. Seems funny on paper…but guess what happens when four middle age men with no children on their own attempt this. It was funny, a S.W.A.T team descended on the park in minutes and told us to get out [laughs].

MG: What has been the highlight joke for you this season?
JM: I think my favorite/most embarrassing moment was when I was getting punished and they secretly took me back to our old high school. They called a general school assembly, which is like 600 students called into the auditorium. They then strapped me to a lie detector test and asked me questions you can only imagine. The first was “Is your name James Murra?y”. The second was “Do you get your back waxed?” Which I do since I am hairy Italian but I just don’t want America to know that I do [laughs]. But now they do.

MG: When you started with this did you ever see it being as popular as it is, especially with the truTV Impractical Jokers app? 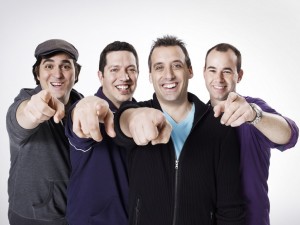 JM: The app is pretty sweet. You can actually call us up directly. We were each given a phone and if we are available we will pick up and chat with a random fan. I think we always hoped it would be popular and do well. It is good to see that people like it and the word is spreading.

MG: How do you feel about all the International spin-offs of this show?
JM: We love that. I get to travel around and consult on the different versions. It is pretty sweet. It is amazing to think that the guys and myself have created something that is spreading around the world. So original productions of the show are on the air in the UK, Quebec, Brazil, Belgium, Holland, Finland, Norway, Sweden, Lebanon and a few more. It is just pretty damn cool.

MG: With season two ending this month, any world about a third season?
JM: We will see. I will leave that up to the networks to decide. The show is doing well and I feel that there is an appetite for more. So hopefully we will have the privilege and honor to give it to them.