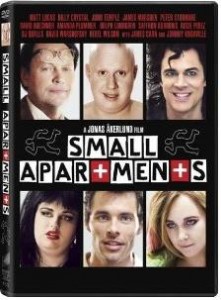 If you are familiar with award-winning film and music video director Jonas Åkerlund known best for films like “Spun” and
Lady Gaga’s “Paparazzi” music video. “Small Apartments” is a real trip to say the least. Having known Jonas’ work, I had an idea what to expect but still didn’t see this film coming. When I say Matt Lucas was starring, I expected laugh out loud comedy. What we got here is more of a black comedy murder cover-up. It has its funny moments but the best part has to be this film’s collection of talent who pop in and out. Not sure if I could watch this again but one viewing was manageable.

Official Synopsis: Trapped in a seedy LA apartment, Franklin Franklin (Matt Lucas) has a dead landlord on the kitchen floor and is surrounded by eccentric neighbors: the stoner (Johnny Knoxville) and girlfriend (Rebel Wilson), the wanna-be stripper (Juno Temple) and the artist (James Caan). To add to his chaos, a drunk investigator (Billy Crystal) is questioning him about his landlord. But none of this fazes Franklin. He dreams of Switzerland, and waits each day for an envelope from his institutionalized brother (James Marsden). Then, one day the envelope doesnt come and Franklin becomes unhinged. Little does he know…his crazy brother has the secret that will set him free.

When it comes to special features there is nothing really going on here besides two pretty useless featurettes.  The first featurette is  “How to Build A Gravity Bong” with Johnny Knoxville.  He gives instructions on how to craft the ideal smoking device…real charming. The other feature is a short behind-the-scenes look into the production. Even though I wasn’t completely in love with this film, I would have loved to have a commentary track with the director and maybe a few of the cast members.