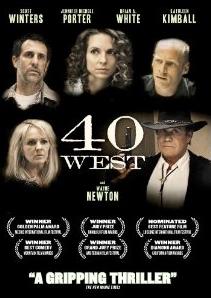 I have to admit that I had never heard of “40 West” before it showed up at my door. I am glad that I checked this out (for the most part) since it is a well-written low-budget indie with a nice punch ending. This plays out like a slow-burn character drama/thriller, though maybe a little too slow. Running two hours, this could have been easily trimmed by 30 minutes and been much more effective. Jennifer Nichole Porter is not just the star of this film, she is also the writer and composer as well. Being a fan of music, I really enjoyed the music in the film for sure. Speaking of music, who doesn’t love Wayne Newton? His role in this film is very clever and well-executed.

“40 West” focuses on Maeve (Jennifer Nichole Porter), a blues singer, that ends up with her car breaking down and purse stolen, when she is about to take a trip. She is helped out by a stranger Elijah (Scott Winters), who looks helpful but then ends up setting her up with ex-con husband Colin (Brian A. White), who handcuffs her in a hotel room and plays catch up after being in prison for five years. The events get more complicated when Colin’s girl from the pen, Arlene (Kathleen Kimball), shows up and on top of that Arlene’s husband Bud (Wayne Newton) makes his appearance as well.

The film’s website boasts winning 17 international awards, which is very impressive for an independent film. Though I am a little confused since The New Maine Times is quoted on the box calling this “A Gripping Thriller”, while it won Best Comedy at the Mountain Film Awards. I guess the pickings were a little light for that festival, the film has a certain dark comedy aspect but really lands more in the drama/thriller genre. Nonetheless, the film does deserve any recognition it gets. So kudos to them, hopefully more to come! You can get this film from iTunes, Amazon.com, Walmart.com and of course the film’s website.