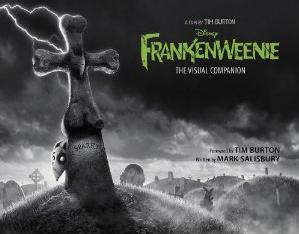 When I first heard that Tim Burton was making a full-length stop-motion feature remake of his original 80’s short film of the same name. I think I did a back flip.  When I saw the film on the other hand I was a little bit disappointed.  Don’t get me wrong the film was visually amazing.  I am huge fan of the art of stop-motion and I feel that it doesn’t get enough attention that it deserves.  The film has grown on it quite a bit with repeat viewings. There is a lot to this film that can be missed with just one viewing.

Let me tell you after reading through “Frankenweenie: The Visual Companion”, I have more appreciation for the amount of work that was put into this film.  I will be scheduling a screening within the next week to revisit this film again just thanks to this book.  To start off there is a terrific foreword by the man himself Tim Burton.  This project has been a real labor of love for him and it really setup up the pace for this book.  Disney Editions has delivered a absolutely gorgeous hardcover book with some really amazing photos jam-packed throughout. I end up reviewing quite a bit of companion or art-of books for various films or video games and this one literally is one of the best I have seen since “The Art of Tron Legacy”.

When it comes to the author Mark Salisbury, if he is doing a companion or art-of book then I know that it is going to be amazing.  Just in 2012, he also authored “Dark Shadows: The Visual Companion” and “Prometheus: The Art of the Film”.  They were easily two of my favorite in 2012.  If you are looking for an in-depth look at the making of “Frankenweenie”, then you will not be left wanting more there.  There is everything from early sketches, puppets development and tons of amazing behind-the-scenes photography. The film is black and white but this book is packed with great color while still respecting and giving ode to the black and white charm the film carriers.

This book was originally scheduled to be released with the film’s theatrical launch but was pushed back to February, which I guess is time with the recent Blu-ray release.  I have to tell you that this is worth the wait for sure.  It is too bad that this film was not better received since like I said after reading this book, you really have to tip your hat to these talented people that are responsible for this film.  Lastly be sure to take a little peak behind the dust cover for a very nice surprise.  I look forward to future releases from Disney Editions, as they have literally never delivered nothing but perfection.