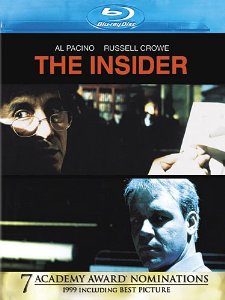 “The Insider” comes packed with some of amazing performances from both Al Pacino and Russell Crowe and was nominated for 7 Academy Awards, including Best Picture, Best Director, and Best Actor. The film runs near three hours but really keeps you engaged non-stop. The film also holds up quite well over time it has been over 10 years since I’ve seen it last and it still delivers. Since I saw “The Insider” back in 1999, I have grown to dislike Mann’s use to in-your-face cameras but it works well for the purpose of this film. If you are a fan of this film, this Blu-ray is worth the upgrade from your previous DVD for sure.

Official Synopsis: Witness the incredible chain of events that pitted an ordinary man against the tobacco industry and dragged two people into the fight of their lives. When former tobacco executive Dr. Jeffrey Wigand agrees to blow the whistle on the alleged unethical practices within the industry, and forms an alliance with veteran 60 Minutes producer Lowell Bergman, he starts an all-out war that could cost both men their reputations and much, much more. Relive every unbelievable twist and turn like never before on Blu-ray.

Disney released an impressive Blu-ray release for this catalog title. This is the first time this film has been released on Blu-ray and comes with all-new digital restoration. The 1080p transfer looks amazing.  There is little if an flaws on this transfer at all.  The DTS-HD Master Audio 5.1 track is also impressive and works well with the score and dialogue. The special features are disappointing though and are just a port of the letdown DVD extras.  There is a short behind-the-scenes featurettes with audio commentary from Pacino and Crowe.  Lastly there is suppose to be a feature titled “Inside a Scene” but I was unable to locate this extra on the actual disc. Skips the extras and stick with the movie and you will enjoy this release.