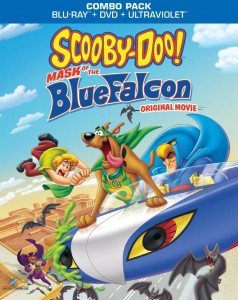 When it comes to “Scooby Doo”, I don’t know what it is but I always enjoy them.  Every since I was a kid and I was watching the classic series and these character have power over me.  This latest original movie “Mask of the Blue Falcon” is a real blast.  It is funny, action packed and features classic characters like Herculoids and Space Ghost and obviously Blue Falcon. Warner Premiere has been releasing new animated feature films at least two per year.  Next up is “Scooby-Doo and the Maniacal Mecha Mutt”, as well as “Scooby-Doo and the Scarecrow”.  Warner is a real pusher of this franchise and I do not see it slowing down anytime soon.  Keep them coming, I can’t wait to introduce my daughter to these films. If you are a Scooby fan or a comic book fan then this release is really for you.

Official Premise: The Mega Mondo Pop Cartoon-a-Con in sunny California marks the spot for mystery in this all-new original Scooby-Doo adventure! Herculoids Frankenstein Jr. and Space Ghost are just a few of the celebrated comic book characters headlining at the unconventional convention plus there’s a megabucks movie premiere starring Scooby-Doo and Shaggy’s all-time favorite super heroes Blue Falcon and Dynomutt! So when the gruesome villain Mr. Hyde unleashes monster bats howling hounds and sinister slime upon the festivities it’s time for Mystery Incorporated to follow the clues and set their monster traps. But it’s the pizza-snacking super-powered tag team of Shaggy and Scooby-Doo who tap into their inner super hero to prevent the entire event from being smothered in ghoulish green goo! Like right on Dog Wonder!

Warner has given this franchise much love over the years. This 1080p transfer really looks amazing on Blu-ray. The combo pack includes not only a Blu-ray plus also a DVD and Ultraviolet Digital Copy. The animation really shines on this release, within its aspect ratio: 1.78:1. The colors are very crisp and sharp. The DTS-HD Master Audio 5.1 works well with the action and crazy antics. Overall this is a very solid release but Warner has yet to disappoint with their animation department. The special features are not jam packed but include three great vintage cartoons. They are “Comic Book Caper”, “Reflections in Ghoulish Eye” and “The Scooby Coupe”. They are a blast to revisit on this release and really look great.