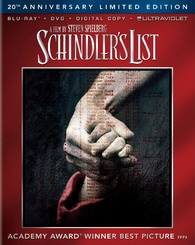 “Schindler’s List” is one spectacular film. You can sum up this film that it is – an experience.  It is easily one of Spielberg’s best films. The film was beautifully shot in black-and-white with some amazing cinematography and fantastic performances.  This film was also not afraid to show the horrors of the Holocaust.  This year marks the film’s 20th Anniversary and the first time ever released on high-def Blu-ray.  This limited edition release went through an extensive high-definition restoration from the 35mm film original negative under the supervision of Spielberg himself. Overall, this release is a must for any Spielberg fan and I guarantee you will be left marveling at the wonderful Blu-ray release, just don’t check the special features.

Official Premise: Adapted from the novel by Thomas Keneally, Steven Spielberg’s masterful film tells the incredible true story of the courageous Oskar Schindler (Liam Neeson). Initially a member of the Nazi party, the Catholic Schindler risks his career and life, and ultimately goes bankrupt, to employ 1,100 Jews in his crockery factory during the Holocaust. Schindler’s Jewish accountant (Ben Kingsley) serves as his conscience, as Schindler conducts business with an obstinate and cruel Nazi commander (Ralph Fiennes), who viciously kills Jewish prisoners from the balcony of his villa overlooking a prison camp. Filmed entirely in black-and-white on location in Poland, “Schindler’s List” does not downplay the faults of its magnanimous and unlikely hero, but relates a story of the triumph of the human spirit in the face of horrific devastation and tragedy.

Universal really went all in with this 20th Anniversary Blu-ray release.  It comes in a combo pack with a Blu-ray + DVD + Ultraviolet digital copy.  The package comes within a high quality DigiPack slipcase. With the supervision of Speilberg, they did such a wonderful job restoring this film and delivering it on Blu-ray with a flawless 1080p transfer within its 1.85:1 aspect ratio. The black-and-white really pops on off the screen and looks all around amazing. Besides the video restoration, Spielberg also supervised the film’s audio elements and let me tell you the DTS-HD Master Audio 5.1 surround track really sounds quite amazing. John Williams beautiful, yet haunting score also benefits from this great track.

The next part where things get a little disappointing. For the first time on Blu-ray and the film’s 20th anniversary, I was hoping for some real stunning extras. Well that is not the case since there is only extra decent included.  There is no new commentary tracks, interviews or retrospectives.  “Voices From the List” is presented only in standard definition and runs just over 75 minutes long.  It is an in-depth look at the production. It is still a wonderful documentary but does not make-up for the major lack of content.  Next up is a brief look at the non-profit organzition with Steve Spielberg in “USC Shoah Foundation Story”. Lastly, there is a promo on the online application for “IWitness”.  I still say buy the Blu-ray for the wonderfully restored film, just be prepared for a major let down in the extras department.