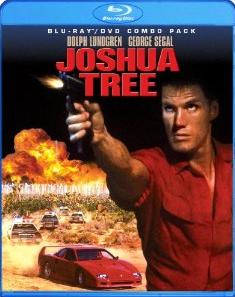 I am a big fan of Dolph Lundgren but I have to say that “Joshua Tree” was not really on my radar prior to this Blu-ray release. The film is also known by “Army of One”. Nonetheless, who doesn’t love Dolph Lundgren kicking ass and taking names. This film is really action packed, great stunts and fights and even though it screams 90’s action, it is very fun and worth checking out for sure. Shout! Factory is behind this release and did a great job with this Blu-ray release.

Official Premise: It’s high-caliber action from start to finish when exotic car runner Wellman Santee (Dolph Lundgren The Expendables) goes gunning for his money and running for his life after his partner is killed during a botched heist. Sensational stunts and spectacular special effects push the action into overdrive as he captures a beautiful hostage (Kristian Alfonso) and takes off across the desert in a high-speed chase. Six thousand square miles of sand and dozens of turbo-charged super cars set the stage for a bloody, bullet-riddled showdown with a ruthless killer.

Shout Factory has delivered an impressive Bluray release for this obscure film. Firstly it comes with a nice widescreen presentation and an aspect ratio of 2.35:1, which is a real improvement over last full screen DVD release from 1999, under the title “Army of One”. The colors are a little flat but the action looks nice. The DTS-HD Master Audio 5.1 audio track is impressive, especially with the non-stop action, fighting and explosions.

The special features are worth checking out if you are a fan of the film. There is an audio commentary track with Director Vic Armstrong and Producer Andy Armstrong. It is a nice balanced track which covers a lot of ground for the production. “A Look Back at The Joshua Tree” is a newly product feature with cast and crew chatting some fun behind-the-scene stories. Lastly there is an alternate ending included and a trailer rounding out the extras.