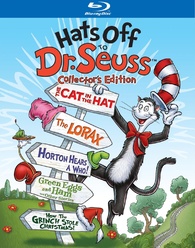 2013 marks Warner’s celebration of the 75th Anniversary of Seuss’ “The 500 Hats of Bartholomew Cubbins”. What better way to celebrate than give your “Hats Off to Dr. Seuss” with this amazing collector’s edition including five of his classic TV specials. The first is “The Cat in the Hat” (1971), “The Lorax” (1972), “Horton Hears a Who!” (1970), “Green Eggs & Ham And Other Stories” (1973) – which was formally titled “Dr. Seuss on the Loose” and includes “The Sneetches”, “The Zax” and “Green Eggs and Ham”.  Lastly “How the Grinch Stole Christmas!” (1966) wraps ups this release. Each of these are available for purchase on Blu-ray previously. If you own these already then this is a simple repackaged box set but if you don’t then it is worth it to check this out. I look forward to sharing these TV specials with my daughter as she grows up.

The Cat in the Hat: It’s a rainy day at home and siblings Dick and Sally have nothing to do. But all of that changes when The Cat and his messy sidekicks, Thing One and Thing Two, burst onto the scene, bringing with them adventure and chaos much to the dismay of a worried pet goldfish. Then, The Cat in the Hat narrates the story of Daisy-Head Mayzie, a girl who mistakenly thinks that the flower blooming on her head will only bring trouble, but eventually propels her to fame and fortune. And finally, blast off to The Hoober-Bloob Highway, where every road from a space laboratory leads to Earth… and eventually to gratitude.

Green Eggs & Ham and Other Stories: Join Sam-Am-I and his persistent attempts at introducing a reluctant fellow to a most delectable dish. Their escapades take them across a zany landscape while assembling a cast of characters that only the imagination of Dr. Seuss can bring to life. Will Sam-I-Am convince his new friend to take a chance and finally try something new? Find out in this timeless tale the whole family will enjoy. Then, meet The Sneetches, who teach us that being yourself is the best way to fit in, while the story of The Zax reminds us that there is nothing to gain from being stubborn.

The Lorax: The award-winning tale of The Lorax tells the story of the greedy, tree-chopping Once-ler and his equally greedy, tree-chopping clan, the brave little Lorax who speaks up for the vanishing forest, and the boy who could right all the Once-ler’s wrongs with a seed and a lesson learned. Then enjoy Pontoffel Pock, Where Are You? and Butter Battle Book, a pair of bonus Dr. Seuss television specials sure to delight.

Horton Hears a Who!: Based on the 1954 book of the same name, the 1970 animated adaptation of Dr. Seuss’ Horton Hears a Who tells the classic story of an elephant named Horton who just so happens to be the only creature capable of hearing the people of a tiny planet floating on a speck of dust. Or perhaps just the only creature who will listen long enough to hear them. Fully remastered, the special also features Horton Hatches the Egg!

How the Grinch Stole Christmas: Every who down in Who-ville likes Christmas a lot, but the Grinch who lived just north of Who-ville did NOT! So the cuddly as a cactus Grinch (with termites in his smile and garlic in his soul) tries to wipe out Christmas for the cheerful Who-villains, only to discover: maybe Christmas, he thought doesn’t come from as store. Maybe Christmas perhaps means a little bit more! Narrated by Boris Karloff and animated by cartoon legend Chuck Jones, it’s an award-winning Who-roast-beast-feast of a holiday classic.

When it comes to the Blu-ray presentations, each of these are equally very impressive with their 1080p transfers.  The colors are very crisp and really pop out well. You can’t forget that some of these specials have a few years under their belt.  There are various audio tracks on each of these specials.  The best of the bunch gets awards to “The Cat in the Hat”, “Green Eggs & Ham and Other Stories” and “The Lorax” with a nice DTS-HD Master Audio Mono track.  They are clear and work well with the dialogue and music.  Next up are good but not really up to Blu-ray full potential. “Horton Hears a Who!” and “How the Grinch Stole Christmas!” both come with a Dolby Digital 2.0 (192kbps) track.  Seeing that these are two of my personal favorites, I was a little let down but overall it is not a total letdown.

On the scale of special features, this release delivers a nice collection of extras.  To start their are four additional TV specials including “The Butter Battle Book” (1989), “Daisy-Head Mayzie” (1995), “The Hoober-Bloob Highway” (1975) and “Pontoffel Pock & His Magic Piano” (1980). Other bonus features includes a sing along version of “The Cat in the Hat”, which is fun for the little kiddies (and the big kiddies also).  There is a 1994 documentary “In Search of Dr. Seuss”, which worth a watch.  There is a featurette for “The Lorax” called “The Trees! The Trees! The Voice Of The Trees”.  Another featurette includes “Dr. Seuss and the Grinch: From Whoville in Hollywood” follows the road from the pages to the screen. Lastly there are four interactive puzzles. Also I should mention that this release comes with a booklet of rate Dr. Seuss artwork including a few images of his hat collection.  I wish this was much longer but still very cool.