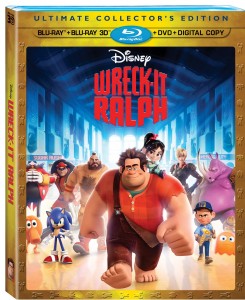 The first time I saw “Wreck-It Ralph”, I was blown away. Read our review here. Disney has done it yet again. Since that first viewing, I have seen this film five times now and it gets better and better with every viewing. If you are a fan of video games great you will love it.  If you have no idea about video games you will still love it. That is why this film succeeds. “Wreck-It Ralph” packs various cameo including Zangief from “Street Fighter II”, Sonic the Hedgehog and Q*bert to name a few. There is also appearances from Oreos, Devil Dogs, Mentos, Nestle Quik and Laffy Taffy. All of the cameos are very clever, not in your face and get tons of laughs. “Wreck-It Ralph” besides being funny and clever, also packs a lot of heart. Be sure to check this get ready to have some fun.

Here is our premise from the theatrical review: On the eve of celebrating the 30th anniversary with his game “Fix-It Felix, Jr.”, Wreck-It Ralph is tired of being the bad-guy.  He wants to be recognized for his work like Fix-It Felix does every game with his medals and getting respect from the buildings residents.  When Ralph leaves his own game to win a medal and prove that he is more than a bad-guy, he gets more than he bargained for.  After heading into the high-def first person shooter game “Hero’s Duty”, he is able to steal the hero’s medal but ends up taking one of the uncontrollable villains known as Cy-Bugs to the kart-racing game called “Sugar Rush”.  This is where he meets the cutie Vanellope von Schweetz and get involved with helping her with her issue of being a glitch and her dream to race in the game.  Of course, the ruler of the game, King Candy, has another plan.  With the help of the lead character of “Hero’s Duty”, Sergeant Tamora Jean Calhoun and Fix-It Felix Jr., they set out to find Ralph and return him to his game before it is put out-of-order for good, as well as to prevent a Cy-Bug invasion of “Sugar Rush”.

Disney spared no expense with this Ultimate Collector’s Edition.  We get a Blu-ray 3D + Blu-ray + DVD + Digital Copy included within this combo pack.  The 3D effects on the Blu-ray look stunning.  You literally get swept into this video game world and taken for ride. The depth added is well balanced and the colors really jump off the screen. I prefer to watch this film in 3D but I have to tell you the 2D Blu-ray of this film looks just as impressive. The DTS-HD Master Audio 7.1 audio track really delivers as well.  It is absolutely stunning, exciting and action packed.  Overall, Disney has again amazed with with their audio/video on their Blu-rays.

In terms special features included here, what is delivered it is amazing but overall a little light on content.  Firstly “Paperman” is one of best short that Disney has ever made it is available in both 3D and 2D.  “Bit by Bit: Creating the Worlds of Wreck-It Ralph” is a nice production featurette with Director Rich Moore, producer Clark Spencer, writer Phil Johnston, art director Mike Gabriel, co-art director Ian Gooding, effects supervisor Cesar Velazquez, animation supervisor Renato Dos Anjos and more on the creation of this video game world. There are four deleted and alternate scenes with an introduction and optional commentary with director Rich Moore. There are four fun promos for the film’s games “Fix-It Felix Jr.,” “Sugar Rush,” “Hero’s Duty” and “Fix It Felix Hammer.”  Lastly be sure to pause the film since it comes with “Disney Intermission”, which is hosted by Chris Hardwick (“The Nerdist”, “The Talking Dead”).  He spends the time informing us about the in-game jokes and video game references. Probably more for parents then kids but still worth pausing.