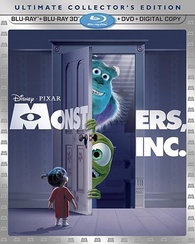 This isn’t the first rodeo for “Monsters Inc” on Blu-ray. It was first released back in November 2009 to the high-def format. It was an amazing release and holds up very well to date. This new Ultimate Collector’s Edition presents this amazing film now in 3D, with 7.1 killer audio track and some great new extras. Is that enough to wet your appetite? My daughter is a big fan already of this film at the young age of eight months. She has a full outfit to transform her into Boo and has visited Disney’s Hollywood Studios in order to meet Mike and Sully. With the release of “Monsters University” hitting theaters this summer, this release is warm welcomed. Disney went all out with this release and is most definitely worth the upgrade whether it is for the 3D or the 7.1 track or the extras.

Official Synopsis: Believed by monsters to be toxic, children are strictly forbidden from entering Monstropolis.  But when a little girl named Boo accidentally follows Sulley back into his world, he finds his career in jeopardy and his life in utter chaos. Assisted by Mike, the two pals plot to rectify the mistake and return Boo to her home.  When the trio encounters an unexpected series of complications, they become embroiled in a cover-up catapulting them into a mystery beyond their wildest dreams.

Since the success of “The Lion King” in theaters, Disney has gotten the itch to go back and convert a view of their classic films. Next up with have “The Little Mermaid” this Fall, which is one that I am really looking forward to.  It is one thing to have the computer generated “Monsters Inc” but the real art comes from bringing the 2D animation into the third dimension. Nonetheless, this 3D presentation of “Monsters Inc.” is quite stunning. They really went through a lot of trouble in order to really make this look amazing. There is some really great depth added within this third dimension, whether it is on the Scare Floor or during the door chase scene. This film looks like it was truly meant and designed to be in 3D.

This five-disc release comes with the following 3D Blu-ray / Blu-ray / DVD Combo + Digital Copy. This is becoming the norm for Disney’s new releases and it does nothing but leaving you quite satisfied. Disney also has upgraded the Blu-ray’s audio track from the 2009 release, DTS-HD Master Audio 5.1 EX to a stunning Dolby TrueHD 7.1 surround track with both the 3D and 2D versions. This track is literally amazing. It would have been very easily and still satisfying for Disney to just leave the old track in there but they went a step further and delivered more.

This 2013 release not only included an amazing 3D transfer, 7.1 sound but also a trio of new and exclusive extras.  There is an extended 3-minute “Monsters University” sneak peek.  I am very excited to see that they also included Toy Story Toons short “Partysaurus Rex” (in 3D, as well). I was shocked that this wasn’t included on the “Finding Nemo 3D” release since it was included with the film when it was released theatrically. There are also Outtakes and Company Play (also in 3D), the gag reel from the Monsters, Inc. theatrical credits included.  The only extra left out from the 2009 release (which is now outdated anyway) is “Ride and Go Seek”, which was a tour of the Monsters, Inc. attraction in Tokyo. Lastly, I was very impressed to see that the classic 2001 short “For The Birds”The rest of the extras are good but taken from prior Blu-ray/DVD releases.

The next set of extras are located on the second disc.  There is an audio commentary track from the Director Pete Docter, co-director Lee Unkrich, writer Andrew Stanton, and executive producer John Lasseter.  I have always like this track and it really gives a lot of details from this amazing collection of that on the film “Monsters, Inc.” There is a “Filmmakers Round Table”, which was filmed at the Hidden City Cafe with Docter, Unkrich, producer Darla K. Anderson, and story supervisor Bob Peterson. This was produced for the Blu-ray release exclusive and it is a blast to watch the genius flow through around this table. Lastly, there is also “Mike’s New Car”, which is the very fun short from the original DVD release of “Monsters, Inc.” I would have loved to see n this converted to 3D as well as “For The Birds”.

The remainder of the special features are located on the third Blu-ray and is a mix of HD & SD extras. “Roz’s 100 Door Challenge”  is an interactive trivia game. “Pixar Fun Factory Tour” is tour of the studio offices with John Lasseter (a little dated but still fun). There are four story Featurettes focusing n the pre-production featurettes of the film. “Banished Concepts” is a collection of five abandoned scenes. “Storyboard to Film Comparison” is a split-screen look at a few scenes. “Designing Monstropolis” introduces us to to work it took to create Mike and Sulley’s city. “Set Dressing” is a look at the props and cameras used on the film. “Location Flyaround” is a 360 degree looks at some of the film’s streets, rooms, and locations.  Too bad this wasn’t in high def, would have been better.

“Monster File” is a two-part EPK with some interviews from the voice actors. “Animation” is six-part feature focusing on the process, titles and the production. “Music & Sound” loos into the sound design and also Billy Crystal and John Goodman’s cover of “If I Didn’t Have You”. “Release” is a collection of promotional material from the premiere to trailers. “Monsters Only Section” is a few more featurettes including “New Monster Adventures”, “If I Didn’t Have You” music video, “Behind the Screams” which is an interview with Mike and Sully and “Orientation” which is a trio of animated videos “Your First Day,” “History of the Monster World” and “Welcome to Monsters, Inc”.  Lastly there is an art gallery of about 900 concept images and a farewell from the filmmakers included.