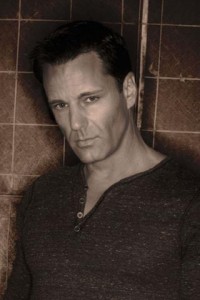 Todd Tucker is the owner of special make-up effects studio, Illusion Industries. He has worked on films like “Hannibal”, “Pirates of the Caribbean  The Curse of the Black Pearl” to TV shows like “Soutland” and “Hannah Montana”. 2013 is a very busy year for him with seven projects aiming to be released including “G.I. Joe: Retaliation” and The Smurfs 2″.  Media Mikes had a chance to chat with Todd about these projects and what we can expect.

Mike Gencarelli: Let’s breakdown your projects for 2013, first let’s chat about your role working on “G.I. Joe: Retaliation”?
Todd Tucker: Unfortunately with this film, I can’t tell you exactly what we did yet but I can describe our experience. What I can say about “G.I. Joe: Retaliation” is that I think the fans are really going to dig what we did on this one. We did a number of different aspects including character looks etc. The first film was cool but it felt a little too much like a video game. It was very CG heavy. Jon Chu, the director, really made this film look like it was happening. Everything is very practical and it feels like you are really experiencing what you are seeing, as oppose to playing a game. The actors are really good at locking in their characters and not making it cheesy. I think this film is going to be very cool and also visually off-the-charts.

MG: Tell us about your work on “The Smurfs 2” and how does it compare from the first film?
TT: It cool since right when I started Illusion Industries, we got called to work on “The Smurfs” and we designed and created the look for Hank Azaria. We made all the appliances. He has a fake nose, dentures, ears, eyebrows and hair. So he looks pretty different. For the first movie, I wasn’t able to be on set. We created everything, did the make-up tests and then handed it off to somebody else. For “The Smurfs 2”, I got to go to Montreal and worked on Hank Azaria’s make-up for the whole show. It was interesting since we started to used the same nose and ears from the first film but Hank had lost some weight and was a little more buffed out. So we had to go in and re-sculpt the nose and downscale it a little bit to adjust for the look. For that point on, we had to just maintain him daily. He is just such a great actor and perfect for the role. He really brought it to life for sure. 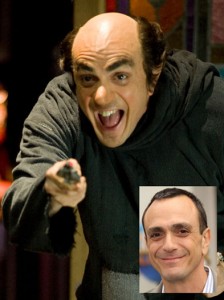 MG: We go from action to animation to drama, tell us about your role in “The Iceman”?
TT: Originally we were going to do all sorts of character age make-ups for this film but then we found out it was not going to help the film. We then created all these period looks. We made all the wigs, mustaches and hairpieces. We did a few things on the lead actor, Michael Shannon, for the film. I can tell you this, I saw it at the Toronto Film Festival and I am not a big mafia movie fan but this movie is intense and the performances are great. I was very proud to have my name at the end of this movie.

MG: If you had to choose out of these three films above, which was the biggest challenge?
TT: The most challenging was “G.I. Joe: Retaliation”. We have our main studio here in Burbank but I also have another in New Orleans. The only problem is for “G.I. Joe: Retaliation”, the build was kind of big and they wanted us to relocate everyone to our Burbank studio to there. So we had to all relocate and move into a haunted house for three months [laughs]. So that was a fun but also a challenge. But it was a really cool project to work.

MG: Can you give us an idea about your work on “Fright Night 2”?
TT: The DP on the film I co-wrote and directed “Monster Mutt” is also the DP on “Fright Night 2”. They were filming the movie in Bulgaria around Christmas time last year. They were going through some changes and need us to come up with a creature design for the finale scene. So two of my guys here put it together very quickly and traveled it down. I think it is going to be very cool. 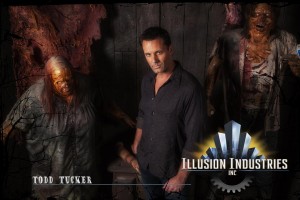 MG: With the films mentioned above and TV shows like “Southland”; do you enjoy the variety of genres?
TT: The thing that is cool is that all different movies and TV shows that we have coming out this year are ranging all across the board. We have family, horror, action, drama and TV shows. We occasionally work on “Sons of Anarchy” and do a lot for the Disney Channel. We are also working currently on Conan O’Brien’s show doing these zombie skits. So yeah, we really like to dapple in all the different genres.

MG: Tell us what else you got planned for 2013?
TT: This year alone in 2013, we have seven films coming out. We got “G.I. Joe: Retaliation” and “The Smurfs 2”. We just finished “Fright Night 2”. we did a movie called “Deadlock Pass”, which was shot in Russia by Renny Harlin. Just did a film called “The East”, which I saw at Sundance and it was a really great flick. Also did a movie called “Fort Bliss”, which is a drama. We are still also doing some TV with Disney Channel. We also have an in-house production company that we produce, direct and come up with in-house projects. We did a family film that I mentioned called “Monster Mutt”, which just came out on DirecTV, iTunes and Vudu this month. It is also available on Walmart.com, Target.com and Amazon.com. So that is doing pretty well. We also have two in-house projects that I am directing this year. One of them is an action/horror film and the other is a very dark fantasy. We are looking forward to that.